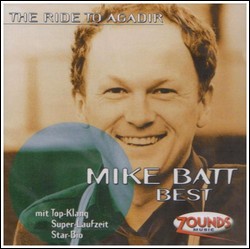 Batt began his career in pop music at the age of eighteen when he answered the same advertisement as Elton John and Bernie Taupin placed by Ray Williams in the New Musical Express by Liberty Records. Batt became part of Liberty's production team, and in 1969 he took over production duties from Noel Walker, on McKenna Mendelson Mainline's first release, Stink. Walker and Batt were credited on the album only as "Liberty Staff". Also in 1969, Batt released as producer/artist a Liberty single, his cover version of The Beatles' "Your Mother Should Know". Batt subsequently became Head of A&R for Liberty.

In the early 1970s, aged 23, married, with children, and having spent £11,000 recording half of a rock orchestral album that was never released, Batt was asked by the producers of a new children's television programme to write the theme music. Instead of taking his £200 fee, Batt asked for the character rights for musical production.[2] The choice produced his first hits as a singer/songwriter/producer by The Wombles, in 1974. The collaboration produced eight hit singles[3] and four gold albums.

Now financially successful, Batt moved on to work with various artists as a songwriter/producer, most successfully with Steeleye Span and their most successful single and album All Around My Hat in 1975.[4] Also in 1975, at the end of the summer, he entered the UK Singles Chart with the only hit under his own name (credited alongside the New Edition) with "Summertime City", which reached number 4.[5]

He produced the hit single "Lilac Wine" for Elkie Brooks in 1978. The song was a hit in the UK and across Europe. He wrote the song "Bright Eyes" for the animated film version of Watership Down. Recorded by Art Garfunkel, it reached number 1 in the UK Singles Chart.[6] Batt also wrote the scores for Caravans (1978 film)

As a singer, his solo albums included Schizophonia and Tarot Suite (both with the London Symphony Orchestra). From these albums came the European hit songs "Railway Hotel", "Lady of the Dawn" and "The Ride to Agadir". A version of "Introduction (The Journey of a Fool)" from Tarot Suite was used as the theme for the Sydney, Australia radio station, Triple M, from its first broadcast in 1980 until well into the 1990s. Over the course of May 2010, this theme tune, still based on the main central riff from "Introduction (The Journey of a Fool)" was re-recorded by Slash, former Guns'n'Roses guitarist, as a new theme to mark the 30th anniversary of Triple M in Sydney. This was released to air at the end of June 2010.

In 1980 Batt released his next album, entitled Waves (including the European hit "The Winds of Change"). In the same year, he went off with his family aboard his boat, 'Braemar', ending up in Australia after two and a half years, travelling via France, The West Indies, South America, Central America, Mexico, Los Angeles, Hawaii and Fiji. At the end of that journey, he wrote for the 50th anniversary of the Australian Broadcasting Corporation the musical, Zero, Zero.

Returning to the UK in 1983, Batt wrote and produced three more Top Ten hits, "Please Don't Fall In Love" (for Cliff Richard), "A Winter's Tale" (for David Essex, with lyrics co-written by Tim Rice) and "I Feel Like Buddy Holly" (for Alvin Stardust).In the same year, he helped write lyrics for Abbacadabra.[2]

The album The Hunting of the Snark, based on Lewis Carroll's poem, was recorded in 1984. It was presented as a dramatised concert at Sydneys State Theatre in 1990, and was produced as a musical in London's West End in 1991 with Batt designing and directing. Performers included: Mike Batt as The Boots, Billy Connolly as The Bellman, Art Garfunkel as the Baker, Roger Daltrey as The Barrister, Justin Hayward as The Butcher, John Hurt as The Narrator and Julian Lennon.

In the late 1980s, Batt also produced Justin Hayward's album Classic Blue and the music for The Dreamstone, ITV's fifty two part animated series, once again with the London Philharmonic Orchestra. A number of stars performed for the Dreamstone soundtrack; notably Billy Connolly, Ozzy Osbourne, former British heavyweight boxing champion Frank Bruno (all of whom performed on "The War Song of the Urpneys"), Bonnie Tyler (who sang a duet with Batt entitled "Into the Sunset". It was not used on the show, but it was meant to be Dreamstone's official love song). Joe Brown performed "The Vile Brothers Mountain Band" along with Gary Glitter. Batt performed the theme song from the series "Better Than A Dream". The show was completed and finally aired in 1990.

In 1995 he made a solo album for Sony Germany, entitled Arabesque. Batt was then commissioned to write the official anthem for the inauguration of the Channel Tunnel by The Queen, entitled "When Flags Fly Together". This was performed for the Queen and President Mitterrand, along with many senior politicians, by members of the choir of the Harvey Grammar School, Folkestone.

Batt composed and produced the four million-selling album, The Violin Player, with classical violinist Vanessa-Mae (EMI Classics, 1995) from which the Top Twenty single of J.S. Bach's "Toccata and Fugue" was taken.[7]

In 1997 Batt produced an album for the soprano, Anna Maria Kaufmann, with the Royal Philharmonic Orchestra; an original dramatic song cycle called Blame It On The Moon, from which his song, "Running With A Dream" was taken as the theme for Germanys national football team at the World Cup in June 1998.[2]

Also in 1998, Batt produced, arranged and conducted the album, Philharmania with the Royal Philharmonic and guest singers included Roger Daltrey, Marc Almond, Bonnie Tyler, Status Quo, Huey Lewis, Kim Wilde, Justin Hayward and others. Later the same year Batt relaunched The Wombles pop group, with two hits, "Remember Youre A Womble" (at number 13) and "The Wombling Song" (at number 27).[3] In 2000 he collaborated with Roy Wood for a single which combined new versions of previous Christmas hits by Wizzard and The Wombles, released as "I Wish It Could Be a Wombling Merry Christmas" - UK number 22).[3]

Later he would work on the music for the 1999 Watership Down TV series, with the Royal Philharmonic Orchestra. Art Garfunkel again performed a song for the TV soundtrack, "When You're Losing Your Way in The Rain" which was not used in the show. The song however originated from Batt's earlier album, Tarot Suite, and was originally performed by Colin Blunstone of 60's group "The Zombies". "Bright Eyes" was instead performed by the former Boyzone member Stephen Gately, although the new version was not as successful as Garfunkel's original. Other stars who were featured on the soundtrack included Cerys Matthews performing "Thank You Stars", (which would later be covered by Katie Melua on her album, Piece By Piece), Paul Carrack who performed "Winter Song" and Gary Martin provided the narration for "Frith's Blessing". Batt also performed an original song, "A View From A Hill".

After conceiving and co-creating the all-girl string quartet Bond and producing their first single, he then created the eight piece classical crossover band, The Planets. Their album Classical Graffiti was released in February 2002 and went straight to number one on the UK classical music chart on the day of release and remained there for three months. Batt was sued for copyright infringement over the track "A One Minute Silence", which consisted of one minute of silence and was credited to 'Batt/Cage'. The publishers of John Cage's music alleged that the credit invoked Cage's silent piece 433, and that the trust was entitled to receive royalties. An out of court settlement was reached, with Batt paying a six-figure sum to the John Cage Trust.[9][10]

Batt formed his own record label Dramatico in 2002, which has a small group of artists including Carla Bruni.[2] Dramatico has since 2005, been one of the top three UK based indie labels, based on official sales figures. Batt is presently dedicating most of his time to guiding the career of Katie Melua, whom he discovered in 2002 while scouting for a jazz musical project he was working on. Melua's album Call Off The Search (containing six of Batt's songs including "The Closest Thing to Crazy") was released on Dramatico in November 2003. After six weeks at number one in the UK Albums Chart, it sold six times platinum - over 1.8 million copies - in the UK and three million copies in total, making Melua the biggest selling UK female artist of 2004. Her second album, Piece by Piece (including Batt's song "Nine Million Bicycles") was released in September 2005, and to date has sold 3.5 million copies in Europe, going to number 1 in the UK, The Netherlands, Norway, Denmark, Iceland and going top five in eight other countries.

In 2008, Batt started the year with one concert in Munich and a radio concert tour in Germany, to promote his new CD, A Songwriter's Tale - a compilation album of his hits, some sung by himself and most of them newly recorded with the Royal Philharmonic Orchestra, Henry Spinetti, Ray Cooper, Chris Spedding, Mitch Dalton and Tim Harries.

His band toured with Spinetti (drums), Spedding (guitar), Harries (bass), Frank Gallagher (keyboards and violins), Luis Jardim (percussion) and Florence Rawlings (vocals and background vocals). After she completed her education, Batt signed Rawlings to Dramatico. He produced her album, A Fool In Love, and wrote six of the twelve songs on it[11] ("The Only Woman In The World", "Jump On The Wagon", "Wolf Man", "Hard To Get", "Can't Hold Your Hand", and "Love Can Be A Battlefield").

Heart And Soul Chris de Burgh
Update Required To play the media you will need to either update your browser to a recent version or update your Flash plugin.