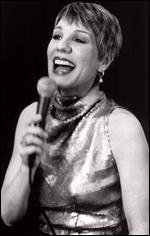 Susannah McCorkle (January 1, 1946 May 19, 2001) was an American jazz singer much admired for her direct, unadorned singing style and quiet intensity.

McCorkle was born in Berkeley, California. She studied modern languages at the University of California, Berkeley. McCorkle began singing professionally after hearing recordings of Billie Holiday in Paris in the late 1960s. She nearly became an interpreter at the European Commission in Brussels, but moved instead to London in 1972 to pursue a career in singing. While in the UK, she made two albums which, although well received, enjoyed only limited circulation.

In the late 1970s, McCorkle returned to the United States and settled in New York City, where a five-month engagement at the Cookery in Greenwich Village brought her to wider public attention and elicited rave reviews from critics.

During the 1980s, McCorkle continued to record; her maturing style and the darkening timbre of her voice greatly enhanced her performances. In the early 1990s, two of the albums McCorkle made for Concord Records, No More Blues and Sábia, were enormously successful and made her name known to the wider world. She was recorded by the Smithsonian Institution which at the time made her the youngest singer ever to have been included in its popular music series. McCorkle played Lincoln Center's Avery Fisher and Alice Tully Halls five times and Carnegie Hall three times, and was featured soloist with Skitch Henderson and the 80-piece New York Pops in a concert of Brazilian music.

Thanks to her linguistic skills, McCorkle translated lyrics of Brazilian, French, and Italian songs, notably those for her Brazilian album Sabia. She had a special affinity for Bossa Nova and often cited Antonio Carlos Jobim's "Waters of March" as her personal favorite. McCorkle also had several short stories published and, in 1991, began work on her first novel. She published fiction in Mademoiselle, Cosmopolitan Magazine, and non-fiction in the New York Times Magazine and in American Heritage, including lengthy articles on Ethel Waters, Bessie Smith, Irving Berlin and Mae West.

A survivor of breast cancer, McCorkle suffered for many years from depression and committed suicide at age 55 by leaping off the balcony of her 16th-floor apartment on West 86th Street in Manhattan. She was alone in her home at the time. The police immediately entered her home after identifying her body and found no foul play. Suicide was ruled the manner of death.[1]

One year later, in a New York magazine tribute entitled "Jazz Bird", Gwenda Blair wrote, "Onstage, singer Susannah McCorkle exuded a sultry self-confidence that won her lifelong fans. But in private, she fought depression so deep -- and so well hidden -- that a year after her suicide, even some in her most intimate circle wonder how they missed the cries for help."

Haunted Heart, a biography of Susannah McCorkle written by Linda Dahl, was published in September 2006 by University of Michigan Press.