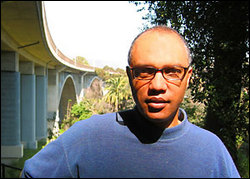 Childs began piano lessons when he was six. At the age of 16, he started attending the Community School of the Performing Arts, a prestigious music program sponsored by the University of Southern California (USC). After having studied theory there with Marienne Uszler and piano with John Weisenfluh, he attended USC (197579), earning a bachelor of music degree in composition, under the tutelage of Robert Linn.[2]

Childs was playing professionally as a teenager and he made his recording debut in 1977 with the J. J. Johnson Quintet during a tour of Japan that is documented as the Yokohama Concert. He gained significant attention during his six-years (197884) playing with trumpeter Freddie Hubbards group. While influenced early on in his playing by Herbie Hancock, Keith Emerson, and Chick Corea and in his composing by Paul Hindemith, Maurice Ravel, and Igor Stravinsky, Childs nevertheless had an original conception of his own from near the start, developing his own voice as both a pianist and a composer in jazz and classical music genres.

Childs solo jazz recording career began in 1988, when he released Take for Example, This..., the first of four critically acclaimed albums on the Windham Hill Jazz label. He followed that album with Twilight Is Upon Us (1989), His April Touch (1992), and Portrait of a Player (1993). A long friendship with Chick Corea resulted in Chicks asking Billy to join his new (at the time) label, Stretch Records, upon Childs departure from Windham Hill Jazz. His next album, Ive Known Rivers on Stretch/GRP (now Stretch/Concord) was released in 1995. Childs then followed withThe Child Within, released on the Shanachie record label in 1996.

Around 2001 Childs had an idea for a group which would have, at its nucleus, piano, acoustic guitar, and harp. It was a sound partly influenced by Laura Nyro's collaborations with Alice Coltrane (on "Christmas and the Beads of Sweat") and partly influenced by a desire to merge the classical and jazz music genres. The Jazz-Chamber Ensemble was the result and the group consists of: piano, bass, drums, acoustic guitar, harp and woodwinds. Sometimes the core group is augmented by string quartet, woodwind quintet, or both.[3]