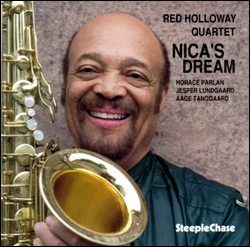 Holloway started playing banjo and harmonica, switching to tenor sax when he was twelve years old. He graduated from DuSable High School, where he had played in the school big band with Johnny Griffin and Eugene Wright, and attended the Conservatory of Music, Chicago. He joined the Army when he was nineteen and became bandmaster for the U.S. Fifth Army Band, and after completing his military service, returned to Chicago and played with Yusef Lateef and Dexter Gordon, among others. In 1948 he joined blues vocalist Roosevelt Sykes and later played with other blues musicians such as Willie Dixon, Junior Parker, Lloyd Price, and John Mayall.

From 1963 to 1966, he was in organist "Brother" Jack McDuff's band, which also featured a young guitarist, George Benson. In 1974, Holloway recorded The Latest Edition with John Mayall and toured Europe, Japan, Australia and New Zealand. From 1977 to 1982, Holloway worked with Sonny Stitt, recording two albums together, and following Stitt's death, Holloway played and recorded with Clark Terry.

Red Holloway died February 25, 2012, one month after Etta James, with whom he had worked extensively.[3]

It's A Heartache Bonnie Tyler
Update Required To play the media you will need to either update your browser to a recent version or update your Flash plugin.