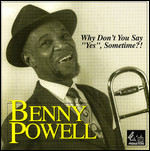 Born Benjamin Gordon Powell Jr in New Orleans, Louisiana, he first played professionally at the age of 14, and at 18 began playing with Lionel Hampton. In 1951 he left Hampton's band and began playing with Count Basie, in whose orchestra he would remain until 1963. Powell takes the trombone solo in the bridge of Basie's 1955 recording of "April in Paris".[3]

After leaving Basie, he freelanced in New York City. From 1966 to 1970 he was a member of the Thad Jones-Mel Lewis Jazz Orchestra, playing on Monday nights at the Village Vanguard. Among other engagements, he played in the house band of the Merv Griffin Show, and when the show moved to Los Angeles, California, in 1970 Powell also relocated there. He did extensive work as a session musician, including with Abdullah Ibrahim, John Carter, and Randy Weston. Later in his career Powell worked as an educator, including as part of the Jazzmobile project. Having moved back to New York in the 1980s, he began teaching at the New School for Jazz and Contemporary Music in 1994.

He died in a Manhattan hospital at the age of 80, following back surgery.

With Bobby Bland and B.B. King

A mani basse Pippo Pollina
Update Required To play the media you will need to either update your browser to a recent version or update your Flash plugin.