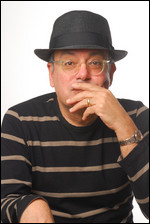 Klein began his career as a bassist, playing with jazz artists Willie Bobo and Freddie Hubbard.[1][3] He went on to perform with other jazz artists such as Carmen McRae, Joe Henderson, Bobby Hutcherson, Wayne Shorter, Herbie Hancock, Bobby McFerrin, and Dianne Reeves.[1][4] As a bass player he has worked with artists such as Bob Dylan, Robbie Robertson, Peter Gabriel, Don Henley, Lindsey Buckingham, and Randy Newman.[1][3]

Klein has produced albums for musicians such as Joni Mitchell, Herbie Hancock, Shawn Colvin, Madeleine Peyroux, Melody Gardot and Tracy Chapman.[3][4] Klein has won Grammys for his work on Mitchell's Turbulent Indigo and Both Sides Now; and Hancock's River: The Joni Letters.[8]

Klein grew up in Monterey Park, California.[9] When Klein was in the junior high school, his mother enrolled him in The Community School for the Performing Arts, an after-school music program sponsored by the University of Southern California.[1][3][9] Klein studied music composition and music theory through the program and began playing in rock bands.[9] By the time he was 17, Klein became interested in the technical challenges jazz music presented to him.[9][10]

After graduating from high school early and enrolling at California State University, Klein began to work with various jazz and Latin music groups.[1][3][11] He also toured as a sideman while a student at California State.[1][3][11] His first job as a touring musician was with Freddie Hubbard.[9] He also played with artists such as Carmen McRae, Wayne Shorter, Willie Bobo and Joe Henderson during this period.[1][3][10][11] After five years of touring, Klein landed a year residency as the bass player for the TV program, The Merv Griffin Show.[3][11] As a bassist, Klein has worked with Robbie Robertson, Don Henley, Bob Dylan, Dianne Reeves, Neil Diamond, Warren Zevon and others.[3]

In 1982, Klein began working as a bassist on Joni Mitchell's Wild Things Run Fast.[9][10] The two became romantically involved and married the same year.[10] It was during his marriage with Mitchell that Klein established himself as a music producer.[10]

Klein continued to work as a bassist during his marriage with Mitchell, most notably working on Don Henley's Building the Perfect Beast, Peter Gabriel's So and Robbie Robertson's self-titled debut.[12] He also played with Tracy Chapman on her self-titled debut.[2]

Klein became known for his work with female artists during his marriage with Mitchell.[7] In 1997, he produced Mary Black's Shine.[2] In 2000, he reunited with Mitchell to produce her Both Sides Now, which won the 2000 Grammy for Best Traditional Pop Vocal Album.[2][8] Klein also produced Julia Fordham's Concrete Love and Mitchell's Travelogue in 2002.[2] In 2004, Klein produced Madeleine Peyrouxs Careless Love.[2]

In 2005, Klein met Brazilian singer Luciana Souza while she was performing at the Los Angeles Philharmonic.[13] The two married in August 2006.[14] He produced Souza's 2007 album The New Bossa Nova.[2][14] Klein also produced Herbie Hancock's River: The Joni Letters, a musical homage to ex-wife Joni Mitchell, in 2007.[15] River: The Joni Letters won the 2007 Grammy for Album of the Year.[8]

In 2009, Klein was nominated for Producer of the Year (Non-Classical) at the 52nd Grammy Awards for his work on Melody Gardot's My One and Only Thrill.[16]

Klein continued his work with Herbie Hancock on Hancock's The Imagine Project.[17] The Klein-produced album won the 2010 Grammy for Best Pop Collaboration with Vocals.[18]

In 2011, Klein partnered with the Universal Music Group and Decca Label Group to create the imprint label Strange Cargo.[3][19] The imprints first signing was Thomas Dybdahl.[19] The label has released albums by Thomas Dybdahl, Adam Cohen, and Rebecca Pidgeon.[1][11][19]

Klein has professional credits for film soundtracks such as Raging Bull, Grace of My Heart, Sweet November, Brokeback Mountain and the theme song for the television series, Felicity.[3][11]

24-7-365 (I'm Gonna Love You) Charles & Eddie
Update Required To play the media you will need to either update your browser to a recent version or update your Flash plugin.