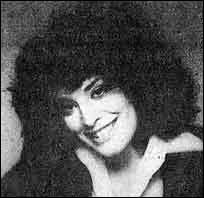 Linda Diane Creed (December 6, 1948 April 10, 1986) also known by her married name Linda Epstein, was an American singer-songwriter and lyricist who teamed up with songwriter-producer Thom Bell to produce some of the most successful Philadelphia soul groups of the 1970s.

Born in Philadelphia, Creed was raised in the city's Mt. Airy section. Her career was launched in 1970 when singer Dusty Springfield recorded her song "Free Girl". That same year, Creed teamed with Bell, a staff writer, producer, and arranger at Kenny Gamble and Leon Huff's record label Philadelphia International Records. Their first songwriting collaboration, "Stop, Look, Listen (To Your Heart)", became a Top 40 pop hit for the Stylistics, beginning an extended collaboration that also yielded the group's most successful recordings, including "You Are Everything", "Betcha by Golly, Wow", "Break Up to Make Up", and "You Make Me Feel Brand New". Creed and Bell also paired on a number of hits for the Spinners, including "Ghetto Child", "I'm Coming Home", "Living a Little, Laughing a Little", and "The Rubberband Man". Linda Creed also worked with fellow Philadelphia native Phyllis Hyman on many of her songs, most notably "Old Friend".

Though diagnosed with breast cancer at 26, Creed kept on working, teaming with composer Michael Masser and writing the lyrics to "Greatest Love of All" for the 1977 Muhammad Ali biopic The Greatest; in the spring of 1986, the song topped the charts for singer Whitney Houston. Weeks before Houston reached number one, Creed died on April 10, 1986, at the age of 37. The following year, her family and friends established the Linda Creed Breast Cancer Foundation. In 1992, she was posthumously inducted into the Songwriters Hall of Fame.

Un attimo di pace Eros Ramazzotti
Update Required To play the media you will need to either update your browser to a recent version or update your Flash plugin.