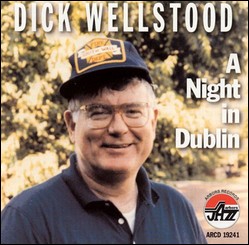 Richard MacQueen "Dick" Wellstood (born November 25, 1927, Greenwich, Connecticut died July 24, 1987, Palo Alto, California) was an American jazz pianist. He was, along with Ralph Sutton, one of the few stride pianists to arise in the 1940s during the rise of bebop.

Wellstood played with Bob Wilber's Wildcats in 1946, and became a mainstay on the trad jazz scene, playing with Sidney Bechet in 1947 and in the 1950s with Jimmy Archey, Conrad Janis, Roy Eldridge, Rex Stewart, Charlie Shavers, and Eddie Condon. He was the house pianist at New York City clubs Metropole and Nick's in the late 1950s and 1960s. He played with Gene Krupa in South America in 1965 and later joined the World's Greatest Jazz Band. He played locally in the 1970s and studied law, briefly going into practice in the 1980s. In the 1980s he also played often with Kenny Davern.

In 1977 completed a tour of the UK with the Dutch Swing College Band.

Tutte le notti Tommaso Paradiso
Update Required To play the media you will need to either update your browser to a recent version or update your Flash plugin.