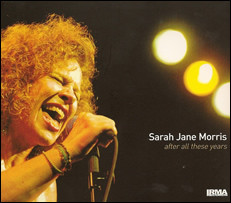 In 1982, Morris joined The Republic as lead singer. A London-based Afro-Caribbean-Latin band with leftish tendencies, they received enormous publicity from the music press including cover stories with NME and City Limits and a documentary for Granada TV. But the band was deemed too political for radio play, with the exception of Capital Radio. The Republic were signed to Charlie Gillet's Oval Records Ltd and released an EP entitled Three Songs From The Republic and two singles entitled "One Chance" and "My Spies". Success did not follow and the band split up in 1984.

Morris explored her more theatrical side on Brecht/Eisler's There's Nothing Quite Like Money and Brecht/Weill's Pirate Jenny from The Threepenny Opera.

The Happy End released two albums on the Cooking Vinyl label with Morris. Following a successful Edinburgh run in 1986, Morris then decamped to chart success with The Communards.

Morris found fame initially with the Communards,[1] who are best known for their hit "Don't Leave Me This Way". Morris featured prominently on many Communards tracks, her low vocal range contrasting with Jimmy Somerville's falsetto. She has also recorded as a solo artist, releasing albums since 1989. These have enjoyed most popularity in Italy and Greece.[2]

Morris also contributed to the opera The Fall of the House of Usher (1991) by Peter Hammill and Judge Smith, singing the part of the chorus.

With The Happy End

Waitin' On A Sunny Day Bruce Springsteen
Update Required To play the media you will need to either update your browser to a recent version or update your Flash plugin.