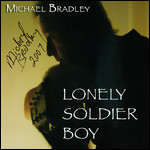 Michael Bradley is a former lead singer for the American rock band Paul Revere & the Raiders. He is also known among anime fans as a composer and singer for Robotech.

Michael Bradley is best known to anime fans as one of the composer/songwriters of Robotech and the singing voice of the characterLancer / Yellow Dancer. Although mainly known in the music industry as a gold and platinum record award-winning songwriter, he has also gained acclaim as a singer, record producer, composer, guitarist and keyboard player.

Michael was formerly a lead singer of the nationally famous rock & roll band, Paul Revere and the Raiders and he was also a guitarist for Las Vegas headliner, Lola Falana.

" In the spring of 1985, my songwriting partner Steve Wittmack and I walked into the offices of Harmony Gold on Sunset Blvd. and were hired to write a song called Flower of Life. It was to be a featured song on the television show, Robotech . This was the beginning of many songs that we would be called upon to write for this groundbreaking animated series that would eventually be seen by millions of fans around the world. I became the singing voice of the character Lancer/Yellow Dancer, who was featured in The New Generation."

Tonight David Bowie & Tina Turner
Update Required To play the media you will need to either update your browser to a recent version or update your Flash plugin.