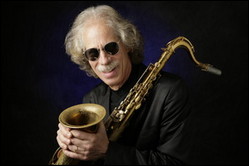 "Blue" Lou Marini, Jr. (born May 13, 1945) is an American saxophonist, arranger and composer. He is noted for his work in the jazz, rock, blues and soul music traditions, and more popularly, for being an original member of the Blues Brothers band as well as featuring in the eponymous, very successful movie in 1980.

Marini graduated from Fairless High School in Navarre, Ohio. His father, Lou Marini, Sr., was the head band director at Fairless and created the school's "Alma Mater" (official song). Each year, Fairless High still bestows the Lou Marini Award in honor of his father's work. Lou Marini, Sr. died in May 2008. Both Lou Marini Sr. and Lou Marini Jr. were inducted into the Fairless Alumni Association Hall of Honor in May 2010. In June 2010, he was named Artistic Director at the first Brianza Blues Festival, in Villa Reale (Monza, Italy)[1].

Lou Jr. attended the University of North Texas, where he played in the famed One O'Clock Lab Band. Following graduation, he gigged as a professional musician and eventually became a member of Blood, Sweat and Tears. He was a member of the Saturday Night Live house band from 1975 to 1983 and appeared in the movie The Blues Brothers and in the sequel, Blues Brothers 2000, playing the part of "Blue Lou" (a name given to him by Dan Aykroyd). He also played on Frank Zappa's 1977 album Zappa in New York, and has worked with a diverse range of artists such as Dionne Warwick, Maureen McGovern, Deodato, Steely Dan, James Taylor, Aerosmith, the Buddy Rich Big Band, and the Woody Herman Orchestra.

First recording as a leader

Marini has spent most of his professional life working as a sideman and arranger. In 2001, Marini recorded his first recording as a leader, with Ray Reach and the Magic City Jazz Orchestra, titled "Lou's Blues" (released 2003). This recording features his arrangements and compositions, many of which have become favorites for the Lab Bands at the University of North Texas. The liner notes[1] of the CD were written by Grammy Award winning composer / arranger / producer Bob Belden. Lou is currently working on a new CD project, again collaborating with Ray Reach, with vocals by his son, Lou Marini III.

Marini's works as an arranger and composer display many influences, including the work of Gil Evans, Bob Brookmeyer, Thad Jones and Don Ellis, as well as rock, pop and avant garde stylistic elements. For example, his composition, "Hip Pickles," originally written for Blood, Sweat and Tears, is described by reviewer Jack Bowers[2] of AllAboutJazz.com, as follows: "Marini's unorthodox notions surface on Hip Pickles, whose free intro gives way to a melody played by screaming trumpets and Clapton-like guitar, prefacing a stormy interchange between Marini (alto) and Tom Wolfe [on guitar]."[3]

Bob Hensley of Los Angeles, California, wrote in a review:

In addition to his solo projects, since the early 1970s, Marini has been one of the most sought-after session musicians on the New York scene. He is admired and respected by his peers as a master of many styles, including jazz, R&B, soul and classical. An abbreviated listing of some of the recording projects in which he has participated included:

Silver Lining (Clap Your Hands) Imany
Update Required To play the media you will need to either update your browser to a recent version or update your Flash plugin.