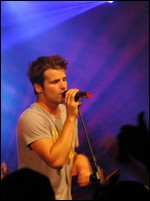 Patrick Nuo (born August 31, 1982 in Canton of Lucerne) is a Swiss-Albanian[1] recording artist and actor.

Nuo was born to an Albanian[2][3] father from the town of Gjakova[4] and to a Swiss[5] mother,Partick was born in Gettnau in Lucerne, Switzerland. He has a younger brother named Simon with whom he was raised in Luthern.[6] At the age of fourteen, Nuo abandoned all hope of becoming a popular tennis pro and decided to focus on a musical career instead. After a few misleading steps at home, he managed to move to Hamburg, Germany where he was engaged as a backing vocalist for several record productions. In the meantime he also worked as a model for charity projects. Gettnau in the Lucerne, Switzerland.

In 2002, Patrick met producer and songwriter David Jost, who helped Nuo sign a contract with Warner Music. In the following months, the duo created a whole album together, which was eventually released under the name Welcome in September 2003. A top 20 chart success in Switzerland and Germany, it spawned three singles; including debut single "5 Days" and follow-up "Reanimate", which reached number 18 on the Swiss Singles Chart.[7] That same year, Nuo joined Zeichen der Zeit, a Christian music project whose first single "Du bist nicht allein" became a top ten success in Germany.[8] A second single released from the project's self-titled compilation album, "Ein weiterer Morgen", entered the top forty of the German Singles Chart the following year.[8] Also in 2004, a reissue of Welcome was released. It produced the single "Undone", which served as the theme song for American comedy film Scooby-Doo 2: Monsters Unleashed (2004) in German-speaking Europe.[7]

In May 2005, Nuo's second album Superglue was released. While not as commercially successful as Welcome in Germany, it would eventually become his highest-charting to date, reaching number four on the Swiss Albums Chart.[7] Two singles were released from Superglue: "Girl in the Moon" and "Beautiful", the latter of which became his first and only top ten hit to-date. The song peaked at number nine and number seven in Switzerland and Austria respectively.[7] In 2006, Nuo reteamed with Zeichen der Zeit to produce their second album Generation David (2006), and participated in another non-profit aid project when he provided vocals for the Fury in the Slaughterhouse cover, charity single "Won't Forget These Days," released during the 2006 FIFA World Cup.

In 2007, after a label change to Ariola Records, Nuo's third album Nuo was released. It widely failed to match the success of his previous studio albums and produced three singles of which lead single "Watchin' Over You" became the only single to chart.[7] In September 2009, the single "Come On Now" was released on Flash Records.

In 2011, Nuo became a member of the jury in the German Idol series show Deutschland sucht den Superstar alongside producer Dieter Bohlen and singer Fernanda Brandao.[9] In 2013, he was one out of eleven celebrities who joined the seventh season of Ich bin ein Star Holt mich hier raus! based on the British reality television show I'm a Celebrity...Get Me Out of Here!. He finished fifth.

Arms Around The World Blackbook
Update Required To play the media you will need to either update your browser to a recent version or update your Flash plugin.