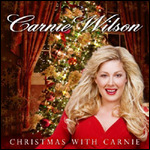 The daughter of American 1960s pop icon Brian Wilson of The Beach Boys, and his first wife, former singer Marilyn Rovell of The Honeys, she co-founded Wilson Phillips with her younger sister Wendy and childhood friend Chynna Phillips when they were in their teens. They released two albums, Wilson Phillips and Shadows and Light, sold 12 million albums, and charted three No. 1 singles and six top 20 hits before breaking up in 1993.

Carnie & Wendy Wilson continued to record together, releasing the Christmas album Hey Santa! in 1993. They joined with their father for a critically successful (yet commercially unsuccessful) 1997 album, The Wilsons. She also sang "Our Time Has Come" with James Ingram for the 1997 animated film Cats Don't Dance.

In 2003, Carnie attempted to launch a solo music career with the album For the First Time. The album featured a remake of the Olivia DiNucci penned Samantha Mumba ballad "Don't Need You To (Tell Me I'm Pretty)," retitled "I Don't Need You To," as its first single. However, the single failed to gain interest and the album was ultimately shelved when Carnie regrouped with Wendy and Chynna as Wilson Phillips in 2004.

Reunited, the band released a third album, named California, which appeared on Sony Music's record label. The album featured cover songs primarily from the 1960s and 1970s, and specifically highlights the musical glory days of their parents' California-based musical groups: The Mamas & the Papas and the Beach Boys.

In 2006, Carnie released an album of lullabies, A Mother's Gift: Lullabies from the Heart,[1] created shortly after the birth of her daughter Lola. She released her second solo effort in October 2007, a Christmas album entitled Christmas with Carnie[2] featuring a song written by her husband; "Warm Lovin' Christmastime".

From 1995-1996, Carnie hosted her own short-lived syndicated television talk show Carnie!. The series was launched during the mid-1990s wave of popularity in "tabloid" talk shows, which followed the sudden successes of Ricki Lake and Jerry Springer. Former Cosmopolitan Magazine Bachelor-of-the-Month Chris Greeley was a guest on the television pilot.

She later guest-starred on episodes of That 70s Show in 2001 and Sabrina, the Teenage Witch before joining the fourth season of VH1's Celebrity Fit Club in 2006.

Wilson has also been a correspondent on Entertainment Tonight and in 2006 hosted a special on E! entitled 101 Celebrity Slimdowns. Wilson became a cast member of the CMT series Gone Country in January 2008. In April 2008, she was a cast member of the VH1 series Celebracadabra. In July 2008, she starred in a new show called Outsider's Inn.

She hosted GSN's new edition of The Newlywed Game, which premiered April 6, 2009, until late 2010 when she was replaced by Sherri Shepherd.[3]

In 2013, Carnie became a member of "Team Rachael" on the second season of Food Network's Rachael vs. Guy: Celebrity Cook-Off. She came in second place to Dean McDermott and won $10,000 for her charity, an autism research foundation.

Wilson has had a lifelong battle fighting obesity. During her Wilson Phillips fame she reached a lifetime weight peak of almost 300 pounds.[6] She was often mocked for her weight by Howard Stern and comedians Julie Brown, and Chris Farley.

Dieting was ineffective; she lost some weight only to regain it later. In August 1999, she underwent gastric bypass surgery, which she felt was a life-saving decision. The procedure was broadcast live on the Internet.[7][8] As a result, she went from a size 28 to a size 6 and lost 150 pounds. In 2003, Wilson posed nude for Playboy. Carnie later toured TV talk shows and hosted her own infomercial to publicize her satisfaction with the procedure. However, she eventually gained back some weight and ended up as a contestant on the fourth season of VH1's Celebrity Fit Club in 2006. Over the course of the show, Wilson lost 22 pounds, which she eventually gained back.[9]

In May 2008, Wilson was widely ridiculed for her weight gain[10] and vowed to get back in Playboy shape, and hopefully pose nude for them again.[11]

Even A Fool Can See Peter Cetera
Update Required To play the media you will need to either update your browser to a recent version or update your Flash plugin.