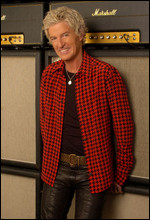 Kevin Patrick Cronin (born 6 October 1951) is the lead vocalist, rhythm guitarist, and occasional pianist for the American rock band, REO Speedwagon. REO Speedwagon had several hits on the Billboard Hot 100 throughout the 1980s, including two chart-toppers written by Cronin: "Keep on Loving You" (1981) and "Can't Fight This Feeling" (1985).

Cronin was born in Evanston, Illinois. He graduated from Brother Rice High School in Chicago, Illinois.

REO Speedwagon switched lead vocalists three times for their first three albums. Terry Luttrell left the band shortly after the group recorded its debut album in 1971, and was replaced by Cronin. Cronin recorded one album with the band, 1972's R.E.O./T.W.O., but left the band soon after, because of missed rehearsals and creative disagreements. Ridin' the Storm Out was the band's third release with as many singers; this time Mike Murphy took the microphone. Murphy stayed on for two more albums, before Cronin returned to the fold in 1976. Cronin's return came after Greg X. Volz turned down the position for lead vocals due to his conversion to Christianity. The band's success hit its peak in the late 1970s and early 1980s, but are still releasing records such as Find Your Own Way Home in 2007. Their most famous album, Hi Infidelity, sold over 10 million copies. Kevin is always in a good mood but has stated in various interviews that they "play for free but get paid for the traveling".

Cronin was a celebrity contestant on Don't Forget the Lyrics! on March 27, 2008. He reached $350,000 before forgetting the lyrics to "Last Dance" by Donna Summer.

He appears on infomercial advertising TimeLife's Ultimate Rock Ballads,[1] which feature tracks by REO Speedwagon, mostly from the 1980s, when the band enjoyed their greatest success.

This article uses material from the article Kevin Cronin from the free encyclopedia Wikipedia and it is licensed under the GNU Free Documentation License.

How Sweet It Is (To Be Loved By You) James Taylor
Update Required To play the media you will need to either update your browser to a recent version or update your Flash plugin.