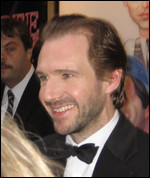 Ralph Nathaniel Twisleton-Wykeham-Fiennes,[1] known simply as Ralph Fiennes (pronounced /ref fanz/; born 22 December 1962), is an English actor. He has appeared in films such as Schindler's List, The English Patient, In Bruges, The Constant Gardener, Strange Days, Maid in Manhattan and the Harry Potter films. Most recently he appeared in The Hurt Locker. Fiennes has won a Tony Award and has been nominated twice for Academy Awards. In 2001, Fiennes received the William Shakespeare Award from the Shakespeare Theatre in Washington, D.C.

Fiennes is a UNICEF UK ambassador.[2]

Fiennes was born in Ipswich, Suffolk, England, into an aristocratic family, the son of Mark Fiennes (1933-2004), a farmer and photographer (and son of industrialist Sir Maurice Fiennes 1907-1994), and Jennifer Lash (1938-1993), a writer.[3] His surname is of Norman origin.[4] He is an eighth cousin of HRH the Prince of Wales, and a third cousin of the adventurer Sir Ranulph Fiennes. The eldest of seven children, his siblings are actor Joseph Fiennes (Shakespeare in Love, Luther, FlashForward); Martha Fiennes, a director (in her film Onegin, he played the title role); Magnus Fiennes, a composer; Sophie Fiennes, a filmmaker; Jacob Fiennes, a conservationist; and his foster brother Michael Emery, an archaeologist. In 1992 Fiennes himself was involved in the discovery of Ubar, an archeological site near the southern coast of Oman. His nephew Hero Fiennes-Tiffin has also played a role as a young Lord Voldemort in Harry Potter and the Half Blood Prince.

The Fiennes family moved to Ireland in 1973, living in West Cork and County Kilkenny for some years, where Fiennes was educated at St Kieran's College for one year, followed by Newtown School, a Quaker independent school in Waterford. They moved to Salisbury in England, where Fiennes finished his schooling at Bishop Wordsworth's School before attending Chelsea College of Art.[5]

Fiennes trained at the Royal Academy of Dramatic Art. He began his career at the Open Air Theatre, Regent's Park and, also during the late 1980s, the National Theatre before becoming a star in the Royal Shakespeare Company.[4] Fiennes first worked on screen in 1990 and then made his film debut in 1992 as Heathcliff in Wuthering Heights opposite Juliette Binoche, for which he received substantial acclaim and praise throughout Europe.

1993 was his "breakout year". He had a major role in the very controversial Peter Greenaway film The Baby of Mâcon with Julia Ormond. Though the film was poorly received, Fiennes' career suffered no lasting consequences, and later that year he became known internationally for portraying the amoral Nazi concentration camp commandant Amon Goeth in Steven Spielberg's Schindler's List. For this he was nominated for the Academy Award for Best Supporting Actor.[4] He did not win the Oscar, but did win the Best Supporting Actor BAFTA Award for the role. His portrayal as Göth also earned him a spot on the American Film Institute's list of top 50 movie villains.

In 1994, he portrayed American academic Charles Van Doren in Quiz Show, and in 1996 was nominated for the Academy Award for Best Actor for the World War II epic romance The English Patient.[4] Fiennes' work has ranged from thrillers (Red Dragon) to animated Biblical epic (The Prince of Egypt) to campy nostalgia (The Avengers) to romantic comedy (Maid in Manhattan) and offbeat dramedy (Oscar and Lucinda).

The Constant Gardener was released in 2005 with Fiennes in the title role.[4] The film is set in the slums of Kibera and Loiyangalani, Kenya. The situation affected the crew to the extent that they set up the Constant Gardener Trust in order to provide basic education around these villages. Fiennes is a patron of the charity.[6] His 2007 performance in the play Faith Healer gained him a nomination for a 2006 Tony Award.

In 2008 he reteamed with frequent collaborator director Jonathan Kent to play the title role in Sophocles' Oedipus the King at the National Theatre in London. He will also appear in a 2010 West End revival of Uncle Vanya. Also, he played the Duke of Devonshire in The Duchess (2008).

In February 2009 he was the special guest of the Belgrade's Film Festival FEST. He plans to make a movie in Serbian capital of Belgrade in 2010 after a Shakespeare book. His plans to do it in 2009 are prolonged because of the economic crisis in the world.[7] He also reunited with Kathryn Bigelow for her Iraq War opus, The Hurt Locker in 2009, appearing as an English mercenary.

Fiennes met actress Alex Kingston while both were students at the Royal Academy of Dramatic Art. After dating for ten years, they married in 1993. However, they divorced in 1997. In 1995, Fiennes started dating Francesca Annis, an actress 18 years his senior, who played his mother in Hamlet. In February 2006 the couple separated after tabloid reports revealed that Fiennes had had an affair with Romanian singer Cornelia Crisan.[8]

In February 2007, staff aboard a Qantas flight from Sydney, Australia to Mumbai, India caught the actor leaving the same aeroplane lavatory as 38-year-old flight attendant Lisa Robertson. At first denying any allegations of a mid-air tryst, Robertson later confessed to having sex in the lavatory with Fiennes, whom she had met just hours before. Fiennes was en route to Mumbai, as a participant in AIDS awareness efforts for UNICEF. The organisation retained Fiennes as an ambassador, but Qantas fired Robertson.[9]

This article uses material from the article Ralph Fiennes from the free encyclopedia Wikipedia and it is licensed under the GNU Free Documentation License.

Living In A Fool's Paradise Irrwisch
Update Required To play the media you will need to either update your browser to a recent version or update your Flash plugin.