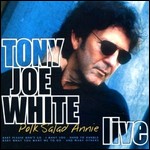 Tony Joe White (born July 23, 1943) is an American singer-songwriter and guitarist, best known for his 1969 hit "Polk Salad Annie" and for "Rainy Night in Georgia", which he wrote but was first made popular by Brook Benton in 1970. He also wrote "Steamy Windows" and "Undercover Agent for the Blues", both hits for Tina Turner in 1989; those two songs came by way of Turner's producer at the time, Mark Knopfler, who is a friend of White. "Polk Salad Annie" was also recorded by Elvis Presley and Tom Jones.

Tony Joe White was the youngest of seven children who grew up on a cotton farm near Oak Grove, Louisiana. He first began performing music at school dances, and after graduating from high school he performed in night clubs in Texas and Louisiana.[1]

In 1967, White signed with Monument Records, which operated from a recording studio in the Nashville suburb of Hendersonville, Tennessee, and produced a variety of sounds, including rock and roll, country and western, and rhythm and blues. Billy Swan was his producer.

Over the next three years, White released four singles with no commercial success in the U.S., although "Soul Francisco" was a hit in France. "Polk Salad Annie" had been released for nine months and written off as a failure by his record label, when it finally entered the U.S. charts in July 1969. It climbed to the Top Ten by early August, and eventually reached No. 8, becoming White's biggest hit.

White's first album, 1969's Black and White,[2] was recorded with Muscle Shoals/Nashville musicians David Briggs, Norbert Putnam, and Jerry Carrigan, and featured "Willie and Laura Mae Jones" and "Polk Salad Annie", along with a cover of Jimmy Webb's "Wichita Lineman". "Willie and Laura Mae Jones" was covered by Dusty Springfield on her album Dusty in Memphis also recorded in 1969.

In 1973, White appeared in the film Catch My Soul, a rock-opera adaption of Shakespeare's Othello. White played and sang four and composed seven songs for the musical.

In late September 1973, White was recruited by record producer Huey Meaux to sit in on the legendary Memphis sessions that became Jerry Lee Lewis's landmark Southern Roots album. By all accounts, these sessions were a three-day, around-the-clock party, which not only reunited the original MGs (Steve Cropper, Donald "Duck" Dunn and Al Jackson, Jr. of Booker T. and the MGs fame) for the first time in three years, but also featured Carl Perkins, Mark Lindsay (of Paul Revere & the Raiders), and Wayne Jackson plus The Memphis Horns.

From 1976 to 1983, White released three more albums, each on a different label. Trying to combine his own swamp-rock sound with the popular disco music at the time, the results were not met with success and White gave up his career as a singer and concentrated on writing songs.

In 1989, White produced one non-single track on Tina Turner's Foreign Affair album, the rest of the album was produced by Dan Hartman. Playing a variety of instruments on the album, he also wrote four songs,[2] including the title song and the hit single "Steamy Windows". As a result of this he became managed by Roger Davies, who was Turner's manager at the time, and he obtained a new contract with Polydor.

The resulting album, 1991's Closer to the Truth, was a commercial success and put White back in the spotlight. He released two more albums for Polydor; The Path of a Decent Groove and Lake Placid Blues which was co-produced by Roger Davies.

In the 1990s, White toured Germany and France with Joe Cocker and Eric Clapton, and in 1992 he played the Montreux Festival.

In 1996, Tina Turner released the song "On Silent Wings" written by White.

In 2000, Hip-O Records released One Hot July in the U.S., giving White his first new major-label domestic release in 17 years. The critically acclaimed The Beginning appeared on Swamp Records in 2001, followed by Heroines, featuring several duets with female vocalists including Jessi Colter, Shelby Lynne, Emmylou Harris, Lucinda Williams, and Michelle White, on Sanctuary in 2004, and a live Austin City Limits concert, Live from Austin, TX, on New West Records in 2006. In 2004, White was the featured guest artist in an episode of the Legends Rock TV Show and Concert Series, produced by Megabien Entertainment.

In 2007, White released another live recording, Take Home the Swamp, as well as the compilation Introduction to Tony Joe White. Elkie Brooks recorded one of White's songs, "Out of The Rain", on her 2005 Electric Lady album. On July 14, 2006, in Magny-Cours, France, White performed as a warm-up act for Roger Waters' The Dark Side of the Moon concert. White's album, entitled Uncovered, was released in September 2006 and featured collaborations with Mark Knopfler, Michael McDonald, Eric Clapton, and J.J. Cale.

The song "Elements and Things" from the 1969 album ...Continued features prominently during the horse-racing scenes in the 2012 HBO television series "Luck".

In 2013, White signed to Yep Roc Records and released Hoodoo.[3] Mother Jones called the album "Steamy, Irresistible" [4] and No Depression noted Tony Joe White is "the real king of the swamp." [5] He also made his Live...with Jools Holland debut in London, playing songs from Hoodoo.[6]

On October 15, 2014, White appeared on The Late Show with David Letterman alongside the Foo Fighters to perform "Polk Salad Annie". Pointing to White, Letterman told his TV audience, "Holy cow! ... If I was this guy, you could all kiss my ass. And I mean that."[7]

In May 2016, Tony Joe White released Rain Crow on Yep Roc Records.[8] The lead track "Hoochie Woman" was cowritten with his wife, Leann.[8] The track "Conjure Child" is a follow up to an earlier song, "Conjure Woman." [8]

This article uses material from the article Tony Joe White from the free encyclopedia Wikipedia and it is licensed under the GNU Free Documentation License.

Here Comes The Rain Mavericks
Update Required To play the media you will need to either update your browser to a recent version or update your Flash plugin.