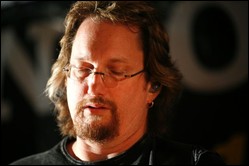 Gerald Calvin (Jerry) Douglas (born as Gerald Calvin Douglas on May 28, 1956 in Warren, Ohio) is an American musician and resonator guitar player. In addition to his eleven solo releases and countless special projects, Douglas has played on more than 1600 albums. As a sideman, he has recorded with artists as diverse as Ray Charles, Peter Rowan, Béla Fleck, Emmylou Harris, Phish, Dolly Parton, T Bone Burnett Paul Simon, Ricky Skaggs, Bill Frisell, John Fogerty, Nanci Griffith, Tony Rice, Elvis Costello, and James Taylor, as well as performing on the landmark O Brother, Where Art Thou? soundtrack. As a producer, he has overseen albums by the Del McCoury Band, Maura O'Connell, Jesse Winchester and the Nashville Bluegrass Band. He has been part of such notable groups as The Whites, J. D. Crowe and the New South, the Country Gentlemen, and Strength in Numbers.

Since 1998, Douglas has been a key member of Alison Krauss and Union Station, touring extensively and playing on a series of platinum albums.

When not on the road with Alison Krauss + Union Station, Douglas tours with his band in support of his extensive body of work.

In 2004, the National Endowment for the Arts awarded Douglas a National Heritage Fellowship.[1]

Douglas has received twelve Grammy Awards. He has also won the Country Music Association's 'Musician of the Year' award three times, in 2002, 2005 and 2007.

Douglas was named Artist in Residence for the Country Music Hall of Fame in 2008.

Douglas was honored at the 36th annual Telluride Bluegrass Festival in Colorado for his twenty-fifth consecutive year playing in and at the festival. He was joking presented a goat from Sam Bush during Sam's performance. As well as performing with Bush, he played with Elvis Costello for his entire performance as well as his normal "house band" appearance and countless others.

National Endowment for the Arts

This article uses material from the article Jerry Douglas from the free encyclopedia Wikipedia and it is licensed under the GNU Free Documentation License.

Rue des étoiles Grégoire
Update Required To play the media you will need to either update your browser to a recent version or update your Flash plugin.