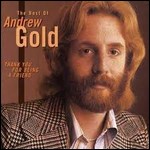 Andrew Maurice Gold (August 2, 1951 – June 3, 2011) was an American singer, songwriter, musician and arranger. His works include the US Top 10 single "Lonely Boy" (1977), as well as "Thank You for Being a Friend" (1978) and the UK Top Five hit "Never Let Her Slip Away" (1978). He had further international chart success in the 1980s as the lead singer of Wax, a collaboration with English musician and songwriter Graham Gouldman.

Gold was born in Burbank, California,[2] and eventually followed his parents into show business. His mother was singer Marni Nixon (who provided the singing voice for numerous actresses, notably Natalie Wood in West Side Story, Deborah Kerr in The King and I, and Audrey Hepburn in My Fair Lady); his father was Ernest Gold, an Austrian-born composer who won an Academy Award for his score for the movie Exodus.[3] He had two younger sisters.

Gold began writing songs at the age of 13. Abroad in England for school, the 16-year-old Gold scored his first recording contract on the strength of a selection of demos he submitted to Polydor Records' London office. That contract resulted in the single "Of All the Little Girls," which was recorded with his friend and collaborator Charlie Villiers, and released in 1967 under the name Villiers and Gold.[4]

By the early 1970s, Gold was working full-time as a musician, songwriter and record producer. He was a member of the Los Angeles band Bryndle, alongside Kenny Edwards, Wendy Waldman, and Karla Bonoff, releasing the single "Woke Up This Morning" in 1970. He played a major role as multi-instrumentalist and arranger for Linda Ronstadt's breakthrough album, 1974's Heart Like a Wheel, and her next four albums. Among other accomplishments, he played the majority of instruments on "You're No Good," Ronstadt's only #1 single on the Billboard Hot 100, and the same on "When Will I Be Loved," "Heat Wave" and many other classic hits. He was in her band from 1973 until 1977, and then sporadically throughout the 1980s and 1990s, appearing at some of her concert appearances.

In 1975, Gold debuted as a solo artist, with the album Andrew Gold. He released four studio albums during the 1970s and over twelve since then. The second of his 1970s studio albums, released in 1976, was titled What's Wrong With This Picture? Its cover art consisted of a photograph with which many things were wrong; however, it had no title track. From it, he released his hit single "Lonely Boy," which reached #7 on the Billboard Hot 100 chart in June 1977[5] and was included in a number of film soundtracks, including Boogie Nights in 1997 and Adam Sandler's 1998 movie The Waterboy. In February 2000, the American rock band Foo Fighters recorded a cover of the song to be used as a B-side for an upcoming single off their 1999 album There Is Nothing Left to Lose; however, it was not used as planned. On Marc Maron's January 17, 2013 WTF podcast, Foo Fighters leader Dave Grohl said that the band's cover of "Lonely Boy" would eventually be released as the A-side of a special "Solid Gold" 45 rpm single with a Foo Fighters version of Gold's "Never Let Her Slip Away" as the B-side.[6]

Although "Lonely Boy" was the bigger radio hit in the States, his single "Thank You for Being a Friend," which peaked at #25 in 1978,[7] later gained popularity as the theme song for The Golden Girls. (It was performed by Cindy Fee over the opening titles of the series.) "Thank You for Being a Friend" has also shown up in places as diverse as an episode of the long-running animated TV sitcom The Simpsons,[8] a 2013 Super Bowl ad for the National Football League,[9] and an audio file in various musical greeting cards. Gold's biggest UK hit was "Never Let Her Slip Away," which made it to #5 twice on the British singles charts, once by him and again 14 years later by dance-pop group Undercover. Freddie Mercury, who was a friend of Gold's, assisted him with harmony vocals as an uncredited background singer.[10][11][12][13][14][15] Among the artists recording Gold's material was British singer Petula Clark who covered "Lonely Boy" in French ("Poor Lonesome Play Boy") on her Paris, Orleans, Paris album. On his 1976 Endless Flight album, Leo Sayer covered Gold's song "Endless Flight," drawn from Gold's own debut album released the previous year.

The year 1975 also marked a successful collaboration with Art Garfunkel, wherein Gold played most of the instruments on Garfunkel's solo hit "I Only Have Eyes For You" (which went to #1 on the UK Singles Chart), as well as several other cuts on Garfunkel's album Breakaway. In 1977 Gold also played guitar on two cuts of Eric Carmen's album Boats Against the Current, including "She Did It," which was a #23 hit that same year.[16] Gold toured with the Eagles, worked in the recording studio and toured with Linda Ronstadt and Jackson Browne; played and sang on record and toured with James Taylor, and was second engineer on part of Joni Mitchell's Blue album.

In 1981, Gold produced, co-wrote, sang and played on three 10cc tracks that appeared on the hit-making pop-rock band's 1981 album Ten Out of 10. Subsequently, Eric Stewart and Graham Gouldman of 10cc invited Gold to become a member of the group. Although he had worked with them in the studio, business conflicts prevented him from joining their ranks. In late 1983, 10cc broke up, and in the aftermath, Gold and Gouldman formed Wax. Wax recorded and toured for five years. They enjoyed international success, particularly in the UK, where the duo had several hits including "Right Between the Eyes" and their biggest hit, "Bridge to Your Heart". Wax broke up as a recording and touring entity in 1989, but Gold and Gouldman continued to write and record together whenever possible.

Gold played on Cher's hit 1989 album Heart of Stone and, during the early '90s, wrote and composed hits for Trisha Yearwood as well as Wynonna Judd, for whom he co-wrote the #1 single "I Saw The Light" with Lisa Angelle. (Later, Gold would produce Angelle on her own album, which featured a number of songs on whose authorship and composition they collaborated.) He also produced singles for Vince Gill, wrote and produced tracks for Celine Dion, and arranged a cover of the Everly Brothers' hit "All I Have to Do Is Dream" that was sung by stars Jeff Bridges and Karen Allen in the 1984 science-fiction film Starman.

In the 1990s, Gold once again joined forces with ex-bandmates Karla Bonoff, Wendy Waldman and Kenny Edwards to re-form Bryndle and release their first full-length album, Bryndle. In 1996, Gold left Bryndle and released the children's Halloween-oriented novelty album Halloween Howls with John Waite, featuring the track "Spooky Scary Skeletons." The same year, he released the solo album ....Since 1951, and produced Stephen Bishop's Blue Guitar album. Thereafter, he recorded the psychedelic '60s tribute album Greetings from Planet Love under the pseudonym "The Fraternal Order Of The All," releasing it on his own record label, "QBrain Records." This album was a multi-tracked solo affair with Gold essentially playing all of the instruments and singing all of the vocals on original songs in the style of Gold's favorite 1960s bands such as The Beatles, The Byrds and The Beach Boys. He produced, composed, and/or wrote tracks for numerous films, such as the comedy Rectuma from director Mark Pirro, and contributed songs to many television soundtracks and commercials. Among his more high-profile gigs, he sang "Final Frontier," the theme song for the television sitcom Mad About You. In a remarkable turn of events, his rendition of the song was used as the wake-up call for the Mars Pathfinder space probe in 1996.[17] Gold also produced seven albums for Japanese singer-songwriter Eikichi Yazawa.

In 2000, Gold compiled a Wax rarities album, House of Wax on Wax, as well as recording and releasing a new solo album The Spence Manor Suite; this last was followed in 2002 by another solo collection, Intermission. In the early 2000s, he formed a Byrds tribute band, Byrds of a Feather, which performed in the Los Angeles area. He appeared in a 2006 concert with the classic rock group America, and singer-songwriter Stephen Bishop, and the performance was later released as a DVD titled America And Friends - Live at the Ventura Theater.[18] The show featured Gold performing "Thank You for Being a Friend," "Final Frontier," "Bridge to Your Heart" and "Lonely Boy," as well as accompanying America and Bishop on guitar and vocals. Gold had earlier produced America's Holiday Harmony Christmas album back in 2002,[19] wherein he also played most of the instruments and co-wrote the track "Christmas in California."

Gold was married to Leslie Kogan. His first marriage was to Vanessa Gold, with whom he had three daughters, Emily, Victoria, and Olivia.[20]

Although Gold put personal references in the lyrics to "Lonely Boy" (including his year of birth), he admitted in an interview that it was not autobiographical: "Maybe it was a mistake to do that, but I simply put in those details because it was convenient. I hadn't been a lonely boy at all — I'd had a very happy childhood."[21]

In 1990, Gold and four of his family members competed on the game show Family Feud.[22]

Gold had been diagnosed with renal cancer and was responding well to treatment; however, on June 3, 2011, he died in his sleep from heart failure at age 59 in Los Angeles.[20]

Some singles released as promo copies only; some chart numbers are from the magazines Cashbox and Record World.

This article uses material from the article Andrew Gold from the free encyclopedia Wikipedia and it is licensed under the GNU Free Documentation License.

The End Justin Jesso
Update Required To play the media you will need to either update your browser to a recent version or update your Flash plugin.