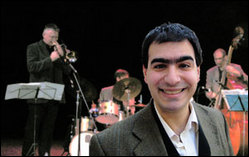 Andy Panayi is a current jazz musician, skilled in performance, composition and arranging. He plays all the flutes and all the saxophones and leads a selection of jazz and classical groups. He also writes commissioned works and self commissioned work for his own arranging, composing & transcribing business ALP Music.

Andy is a leading member of the current British jazz scene having performed and recorded with a selection of artists including Shirley Bassey, Paul McCartney, Salena Jones & Helen Shapiro.

Born in Islington in north London and interested in music from an early age, Andy studied at the Trinity College of Music before embarking on a professional music career.

He now works with the Associated Board of the Royal Schools of Music (ABRSM) as a consultant specialising in developing the Jazz syllabus for future examinations.

This article uses material from the article Andy Panayi from the free encyclopedia Wikipedia and it is licensed under the GNU Free Documentation License.