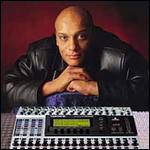 Mel George Gaynor (born 29 May 1959 in Balham, London, England[1]) is an English musician. He is best known as the longtime drummer for the rock band Simple Minds.[2] Gaynor was born to a Jamaican father and an Afro-Brazilian mother.

After leaving Samson, Gaynor joined Simple Minds in 1982 as a session drummer for the New Gold Dream album (as a recommendation by record producer Pete Walsh), playing on six of the nine tracks. He later joined the band permanently for the New Gold Dream tour, as a replacement for Mike Ogletree. Except for a period (1992–97) away from the band after the Real Life tour of 1991–92 and remained the Simple Minds drummer until 2017.

Gaynor began drumming at age 11 and had his first professional engagement at age 14.

In addition to drumming, he is active as a songwriter and a record producer.

Gaynor considers The Rolling Stones, Led Zeppelin, Jimi Hendrix, James Brown, and the Mahavishnu Orchestra to be his main influences.

In 2007 Gaynor has kicked off his solo project with a version of "Play That Funky Music" and his new solo album was released at end of 2016 Gaynor's first single is the re recording of Robert Palmer's Addicted to Love released 12 September 2016.

Gaynor was also a member of Birmingham-based Muscles, a funk-oriented covers band that had minor chart success with "If It Relaxes Your Mind" and "I'm a Girlwatcher".

Gaynor has played a variety of drum sets over the years, including and currently Natal drums, and uses Remo drumheads. He has played a variety of cymbals as well, including at first Paiste during at the start of his career, but then switched to Zildjian in the early 1980s upon joining Simple Minds, which he played for much of the duration of his career. He has also endorsed Anatolian, UFIP, and also Meinl cymbals at various other stages in his career, but in 2011, Paiste announced him as an official endorser again, and has remained so to this day.. Gaynor has recently acquired an Italian company to make his signature sticks called Drum Art, and will also be coming out with a signature snare drum from the same company.

Gaynor is a Freemason. He and his Simple Minds colleague Derek Forbes are members of Lodge Shalom 1600 on the Roll of The Grand Lodge of Scotland.[3][4]

This article uses material from the article Mel Gaynor from the free encyclopedia Wikipedia and it is licensed under the GNU Free Documentation License.

Iron Lion Zion Bob Marley & The Wailers
Update Required To play the media you will need to either update your browser to a recent version or update your Flash plugin.