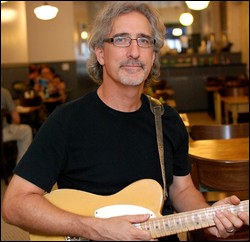 As a songwriter he has had over 100 songs recorded by various artists. In 1998 he won a Grammy Award for Record and Song of the year for producing and co-writing the song Sunny Came Home (a 1997 hit for Colvin). Albums he has produced have been nominated for a total of 11 Grammy Awards.[1] In 2005 he composed the score for the film Winter Solstice.[2] Leventhal co-wrote all of the songs on Rosanne Cash's 2014 release, The River & the Thread.[3]

Leventhal lives with his wife Rosanne Cash and their children in New York City.[4]

This article uses material from the article John Leventhal from the free encyclopedia Wikipedia and it is licensed under the GNU Free Documentation License.

Where We Belong Ellis Mano Band
Update Required To play the media you will need to either update your browser to a recent version or update your Flash plugin.