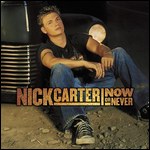 Nickolas Gene "Nick" Carter (born January 28, 1980) is an American singer, musician, and actor. He is the youngest member of the vocal group, the Backstreet Boys and the older brother of Aaron Carter. With the Backstreet Boys, Carter has sold more than 100 million records worldwide.

Carter was born in Jamestown, New York,[1] the son of Jane E.(née Spaulding) and Robert Gene Carter. His siblings include B.J. Carter, Angel, Leslie and Aaron. He also has an older half-sister named Ginger from his father's first marriage, a younger half-brother, Kaden, and a younger stepsister, Taelyn, by his new wife. Carter's father, Robert is an American (of English ancestry), and his mother, Jane Spaulding is a Mayflower descendant of English, Welsh, Irish, German, and 1/4 Blackfoot ancestry.

Several years later, the family moved to Apollo Beach, Florida and managed a retirement home where they added his younger siblings to their family.[2] Carter began auditioning for acting roles in the early 1990s, and appeared in many commercials. He later made a tiny background appearance in Edward Scissorhands as a kid playing on a slip and slide. It is said that through several auditions, Nick met AJ McLean and Howie Dorough and they became friends.

Nick began his career in the late 1980s and covered a number of songs made popular by other artists. These songs included "Breaking Up Is Hard to Do", "Uptown Girl" and "Hard to Get". Some of these early recordings were released in 2002 on the CD titled Before the Backstreet Boys 1989-1993 by Dyenamic Discs, Inc. He immediately became very popular among many fans, including Suzy Lurie of American High fame. Lurie later claimed she wished he was her "boyfriend."

Later, the three friends formed a mini-vocal group and started seeking a manager. They encountered Lou Pearlman, who thought it would be appropriate to seek a fourth and fifth member. This was the chance for Kevin Richardson to join the group. Kevin then called his cousin Brian Littrell and the group was set. In the beginning, there was no success in the United States, even though the first single had been a hit on Orlando radio stations. Lou then marketed the Backstreet Boys in Europe, where they became commercially successful in 1995. The first single chosen to be released was We've Got It Goin' On released to radio in late August 1995. The song was a minor success, which resulted in promotion being shifted to Europe. The single did well on several European charts, which sent them on a summer tour there. They finished recording in April 1996 and filmed their second music video, Get Down (You're the One for Me) in Germany as well. On May 6, 1996, their debut was internationally, except in the US and Canada. It was later released that September in Canada.

European popularity grew, and the Backstreet Boys kicked off 1996 being voted the No. 1 international group by TV viewers in Germany "I'll Never Break Your Heart" went gold there and hit No. 1 in Austria. The group earned their first platinum record in Germany and toured Asia and Canada. They became one of the most successful debut artists in the world. They were able to get attention from China and South Asian countries. As their success mounted, Carter became known as the "heartthrob" or cute one of the group. As the youngest member, he is considered as the baby of the group and Kevin Richardson often called him "little brother".

He was ranked #1 on the list of "Hottest Teen People Under 21" by Teen People magazine and was also named "The Biggest Teen Idol" by Teen People magazine. He was also named one of People magazines "50 Most Beautiful People in the World" in 2000, and voted CosmoGirl's Sexiest Man in the World" in 2002. The Backstreet Boys also guest starred on the television series Sabrina, the Teenage Witch. They began recording their second album, Backstreet's Back, in January 1997, releasing "Quit Playing Games With My Heart" in June. They also recorded the song, If You Stay, for the Booty Call soundtrack in January 1997. Coinciding with the release of their second international album, the band released a self-titled album in the US which collected songs from both international albums. They hit big on the U.S. charts and debuted at No .1 in Germany, Norway, Switzerland, Finland and Austria. The two albums sold more than 28 million copies worldwide (14 million copies in the U.S.)[12]

In December 1997, the band embarked on a 60-city, 20-country tour. In September 1998 the group began work on their next album. Work on Millennium began in September 1998, with recording taking place from October 3, 1998 to early March 1999 in multiple cities. Millennium became the best-selling album of 1999 in the U.S., selling 9,445,732 albums.[15] Millennium remained on the Billboard chart for 93 weeks, eventually selling over 12 million copies in the United States and being certified 13 times platinum.[16][17] As of the end of December 2008, the album stands as the fourth best selling album in the US of the SoundScan era.[16] In 2003 it was also reported as being the fourth biggest seller for Music Club sales in the US over the past 14 years with sales of 1.59 million. In Canada, the album is seventh biggest selling album since 1995 in the Canadian Soundscan sales era up to end of December 2007. The album has sold over 40 million copies worldwide. Their follow-up album, Black & Blue never matched up to the hype that their previous two albums made. After a three-year hiatus, the group has released Never Gone in 2005, Unbreakable in 2007 and This Is Us in 2009. Together, their album sales exceed 100 million copies.

Carter attempted a career as a solo artist in 2002, when he released Now Or Never. The album reached #17 on Billboard 200 and was certified gold. That same year, Carter was named "The Sexiest Man in the World" in a CosmoGirl Magazine poll conducted by its readers.

Nick Carter began work on his second solo album in 2003, but the recordings were aborted when the Backstreet Boys returned to the studio. One of the tracks from the earlier recording sessions was used as the theme song to the House of Carters in 2006. "Let It Go" was written by Nick Carter, Matthew Gerrard, and Bridget Louise Benenate.[3]

Carter and his siblings starred in a reality television show, House of Carters, which premiered on October 2, 2006 on E!. The series features all five Carter siblings reuniting to live in the same house, as well as feature in-depth moments of their ups and downs.[4] The first season of HoC had 8 episodes, and Carter has since said the show will not seek another season.

He appeared opposite Kevin Zegers in the 2004 horror film, The Hollow, made two appearances on the TV show "8 Simple Rules", and also appeared on "American Dreams". In 2007 Carter filmed the independent movie Fast Glass with Brandon Quinn, Andrew Keegan, Natalia Cigliuti, Greg Grunberg, and Reno Wilson.[5] It was originally scheduled for release in 2008, but now it appears to be languishing in development hell.

Carter has acknowledged ongoing struggles with drug addiction and alcoholism. He says that he got sober after being diagnosed with cardiomyopathy and realized that he could die if he did not make major lifestyle changes.[6] The singer credits a healthy lifestyle with helping turn his life around.

"Working out definitely helped my self esteem, and it definitely made it easier for me to kind of push it aside," he says. "I just started replacing drinking and the parties...with healthier things like sports, video games."[7]

Nick Carter was announced as the new Special Ambassador for the Year of the Dolphin (YoD) on May 17, 2007. He was to record a new song and video with all proceeds going to this project, and also make a public service announcement and appear at local schools.[8]

On March 7, 2005, Nick Carter was stopped for allegedly violating traffic rules. The officers then conducted field sobriety tests and arrested him.[9]

Carter, in more recent years, has stayed out of the public limelight. He currently resides in Los Angeles, California.

This article uses material from the article Nick Carter (musician) from the free encyclopedia Wikipedia and it is licensed under the GNU Free Documentation License.

Shout Tears For Fears
Update Required To play the media you will need to either update your browser to a recent version or update your Flash plugin.