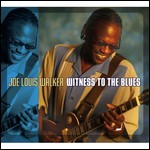 Joe Louis Walker, also known as JLW (born December 25, 1949)[1] is an American musician, best known as an electric blues guitarist, singer, songwriter and producer.[2] His knowledge of blues history is revealed by his use of older material and playing styles.[3] NPR Music described him as "Powerful, soul-stirring, fierce and gritty...a legendary boundary-pushing icon of modern blues."[4]

He was born Louis Joseph Walker Jr. in San Francisco, United States.[5] He came from a musical family, amidst the early influences of T-Bone Walker, B.B. King, Meade Lux Lewis, Amos Milburn, and Pete Johnson. Walker first picked up the guitar at the age of eight, and became a known quantity within the Bay Area music scene by the age of 16. While publicly performing through his teens, he soaked up many influences (especially vocalists such as Wilson Pickett, James Brown, Bobby Womack and Otis Redding). In these early years, Walker played with John Lee Hooker, J.J. Malone, Buddy Miles, Otis Rush, Thelonious Monk, The Soul Stirrers, Willie Dixon, Charlie Musselwhite, Steve Miller, Nick Lowe, John Mayall, Earl Hooker, Muddy Waters, and Jimi Hendrix. By 1968, he had forged a friendship with Mike Bloomfield; they were roommates for many years until Bloomfield's untimely death.[1]

This event was the catalyst that placed Walker into a lifestyle change. He left the world of the blues and enrolled himself at San Francisco State University, achieving a degree in Music and English. Throughout this time, Walker was regularly performing with The Spiritual Corinthians Gospel Quartet.[1] After a 1985 performance at the New Orleans Jazz & Heritage Festival, he was inspired to return to his blues roots whereupon he formed the "Bosstalkers" and signed to the HighTone label. Under the auspices of Bruce Bromberg and Dennis Walker, his debut album, Cold Is The Night was released in 1986.[1] He began a worldwide touring schedule, delivering a four more releases in succession for HighTone (The Gift (1988), Blue Soul (1989), Live at Slims Vol 1 (1991), and Live at Slims Volume 2 (1992).

After the long partnership with HighTone, Walker was signed by Polygram to their Verve/Gitanes record label.[1] His first of many Polygram releases ensued with Blues Survivor in 1993. This marked the beginning of an eclectic era that merged many of his gospel, jazz, soul, funk and rock influences with his trademark blues sensibilities. 1993 also saw the release of B.B. King's Grammy Award-winning Blues Summit album, which featured a duet with Walker (a Walker original, "Everybody's Had the Blues"). This was followed up by a live DVD release, featuring another duet with Walker (a rendition of "T-Bone Shuffle").

Blues of the Month Club was released in 1995, and was the first of three Walker albums that were co-produced with Steve Cropper. This was followed up by the release of Great Guitars in 1997. Walker's guest musicians on this release, included Bonnie Raitt, Buddy Guy, Taj Mahal, Clarence "Gatemouth" Brown, Otis Rush, Scotty Moore, Robert Lockwood, Jr., Matt "Guitar" Murphy, Steve Cropper, Tower of Power, and Ike Turner.

In 2002, he featured on the Bo Diddley tribute album, Hey Bo Diddley – A Tribute!, performing the song "Who Do You Love?".

In March 2008, Walker signed to Stony Plain Records, and recorded his first album for the label in April (produced by Duke Robillard). This album featured guest appearances by Robillard and Todd Sharpville, and was released in September 2008. His second album for the label was released in September 2009 entitled, Between A Rock and The Blues. This album featured Kevin Eubanks as a special guest, best known for his work as the musical director for The Tonight Show with Jay Leno. This album garnered five nominations in the 2010 Blues Music Awards.

In 2012, Walker signed with Chicago-based Alligator Records and released Hellfire, produced by Tom Hambridge. Billboard Magazine called it "One of the strongest albums in Walker's canon. Hellfire blows all over the map…gutbucket blues, joyous gospel, Rolling Stones-style rock crunch, and aching R&B. Walker's guitar playing is fine and fierce. Hellfire is a heavenly showcase for Walker's virtues."[6] In 2014, Alligator released Hornet's Nest, also produced by Hambridge. The Chicago Sun-Times said: "Hard rock to gospel, Hornet's Nest is proudly modern, designed to rest comfortably alongside anything from the Black Keys or Jack White. Walker's voice demands attention: scorching, imploring, always commanding, it leads this dynamic album along with his heavy guitar fills that lay the ground work for the horn-peppered soul, Memphis soul, gospel harmony, and a vortex of power chords and funk. He is living proof of the boundless potential of blues."[7]

In 2013, Walker was inducted to the Blues Hall of Fame.[8] In addition that year, Walker was nominated in four categories for a Blues Music Award.[9]

His album Everybody Wants a Piece (2015) was nominated for a Grammy. In an interview with PatchChord News in early December he shared his philosophy about music, saying "Don't be afraid to add other cultures into your sound." [10]

This article uses material from the article Joe Louis Walker from the free encyclopedia Wikipedia and it is licensed under the GNU Free Documentation License.

Midnight man Flash And The Pan
Update Required To play the media you will need to either update your browser to a recent version or update your Flash plugin.