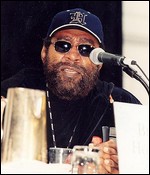 This article is about Brian Holland, an African American songwriter and record producer. For the Bryan Holland, who is best known as the lead singer/guitarist of the American band The Offspring, see Dexter Holland.

Brian Holland (born February 15, 1941 in Detroit, Michigan) is an African American songwriter and record producer, best known as a member of Holland-Dozier-Holland. That songwriting and production team that was responsible for much of the Motown sound and numerous hit records by artists such as Martha & the Vandellas, The Supremes, The Four Tops, and The Isley Brothers. Holland, along with Lamont Dozier, served as the team's musical arranger and producer.

Holland has also had an on-and-off career as a performer. He released a solo single in 1958 as "Briant Holland", and was later (1960-62) a member of Motown recording act The Satintones as well as being a member of The Rayber Voices, a quartet that backed up several early Motown recording acts. He also partnered with Lamont Dozier in the act "Holland-Dozier" which released a lone single on Motown in 1963, was inactive for a number of years, and was then revived in the early and mid-1970s scoring a number of medium-sized R&B hits. Holland resumed his solo recording career in 1974, hitting the charts as a solo artist in '74 and '75.

This article uses material from the article Brian Holland from the free encyclopedia Wikipedia and it is licensed under the GNU Free Documentation License.

Libera l'anima Massimo di Cataldo
Update Required To play the media you will need to either update your browser to a recent version or update your Flash plugin.