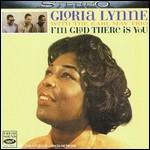 Gloria Lynne (born November 23, 1931, New York City) is an American jazz vocalist with a recording career spanning from 1958 to 2007. Born Gloria Alleyne, Gloria Lynne grew up in Harlem; her mother was a gospel singer.

As a young girl, Lynne sang with the local African Methodist Episcopal Zion Church Choir. At the age of 15, she won first prize at the "Amateur Night" at the Apollo Theater. She shared the stage with contemporary night club vocal ensembles as well as with Ella Fitzgerald, recording as part of such groups as The Enchanters and The Dell-Tones in the 1950s. She recorded as a soloist under her birth name, though most of her work was released under her stage name on the Everest Records and Fontana Records labels. She was signed to Everest in 1958.[1]

Although showing much promise early on, especially after TV appearances, including the Harry Belafonte Spectacular, her development suffered through poor management: some unscrupulous recording 'executives' profited while she was left virtually penniless, saved only by the fact that she was able to work steadily and earn her money from performancestill today she receives only a trickle of royalties.

In the 1960s she had several hits including "June Night", "Love I Found You", "I'm Glad There Is You", "I Wish You Love" (1964)which became her signature songand her answer to Gene McDaniels's "Tower Of Strength", "(You don't have to be a) Tower Of Strength", a pop hit that proved how versatile she could be in the studio. After her time with Everest Records she moved to Fontana and recorded such albums as Soul Serenade, Love And A Woman, Where It's At, and Here, There And Everywhere, all of which showcased her versatility in jazz, RnB, soul and melodic "pop". During her earlier years on-the-road Gloria Lynne shared bills with some of the giants of RnB, jazz, pop and standards including Ray Charles, Billy Eckstine, Johnny Mathis and Ella Fitzgerald. Notable TV specials include two with Harry Belafonte[2] and duets with Billy Eckstine. As Lynne moved into jazz in her later career she worked with top flight musicians and arrangers and performed with many of the jazz greats, including Quincy Jones, Bobby Timmons, Philly Joe Jones, Harry "Sweets" Edison.

She famously wrote lyrics for Watermelon Man with Herbie Hancock, and All Day Long with Kenny Burrell. New York City proclaimed July 25, 1995 as Gloria Lynne Day.[3] In 1996 Lynne received the International Women of Jazz Award and she was honored with a Pioneer Award by the Rhythm and Blues Foundation in 1997. Other awards and recognitions include the National Treasure Award from the Seasoned Citizens Theatre Company (2003); induction into the National Black Sports and Entertainment Hall of Fame; Living Legend Award from the State of Pennsylvania (2007).[4]

In June 2007 High Note Records released Gloria's latest CD "From My Heart To Yours", a musical journey from James Taylor ("The Secret O' Life"), Michel Legrand ("How Do You Keep The Music Playing") and styling on classics like "It's Magic". Lynne continues to record and write near her home in New York. In February 2008 British writer/performer Graham Hunter published the first of a six part feature and rare interview with Lynne in the UK Beat Magazine, renewing interest in the soul singer/songwriter.

On May 6, 2008, Gloria Lynne was presented with a special award for 'Outstanding Achievement In Jazz' at the New York MAC Awards and on October 22, 2010 she was honored at the Schomburg Library in NYC by Great Women In Music founder Roz Nixon for her many contributions to the music industry and the world.

Along with her son Richard Alleyne, Lynne is involved in their production company Family Bread Music Inc.[5]

This article uses material from the article Gloria Lynne from the free encyclopedia Wikipedia and it is licensed under the GNU Free Documentation License.