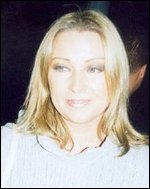 Malin Sofia Katarina Berggren (born 31 October 1970) is a former member of the band Ace of Base. Having been interested and involved in music since her childhood, she formed the band in 1987, along with her sister Jenny, her brother Jonas and their friend Ulf Ekberg. Before forming Ace of Base, Malin sang in her church's choir.[1] She was born in Gothenburg, Sweden.

When Ace of Base was signed to Danish label Mega Records in 1990, Malin, or Linn as she became known, chose to put her teaching career on hold. But while her sister Jenny has stated she always wanted to be a singer, Linn has never said anything similar. On the contrary, in 1997 Linn said: "I wanted to sing; I never wanted to be a singer". Linn's vocal range is contralto.

During the promotion for Ace of Base's first album, Linn was the principal lead vocalist for the majority of the singles and was generally the main focus in the videos, although on some singles (The Sign, Waiting for Magic) and album tracks Jenny and Linn shared leads. The focus became more equal with her younger sister, Jenny, during the release of their second album, The Bridge. Beginning in 1997, Linn appeared at her band's concerts only to perform in the dark or from behind objects; most often keyboards.[2][3] From 1997 onwards, her appearance in the band's music videos was much less than previous videos. Her image in the videos became at times blurred (Cruel Summer) or almost nonexistent (Travel to Romantis). Linn has not granted a personal television interview since that year.[4] The other band members, too, have been somewhat reluctant to explain what has happened to Ace of Base's former lead singer. Linn frequently avoids cameras.[5][2][3]

The band's management and record companies have explained Linn's odd behavior inconsistently over the years. In 1997, when Linn did not perform at the World Music Awards, Claes Cornelius at Mega Records said it was because she did not wish to wear the heavy make-up the performance would have required.[2] The band performed "Ravine" with Linn pretending to play keyboards in the far background of the stage.[2][3] In 1998 when Linn walked off the set of the "Cruel Summer" video in Rome, her manager said it was because she did not wish to appear in the foreground of the video.[3] Director Nigel Dick later revealed she would not have appeared at all, were it not for his insistence. As a result, Jenny performed both her own and Linn's parts in the video. Bravo magazine claimed later that year that Linn was seriously ill, a claim which appeared to be true, based on Linn's odd, shaking appearance on Germany's television spot The Dome, and photos appearing in Bravo.[3] Ulf Ekberg once claimed Linn had a "camera phobia", but other sources have cited her long-time fear of flying as the reason for her absence at the band's concerts. However, Linn also did not appear at events in Gothenburg and Copenhagen, where she would not have had to fly. The members of the band have stated that she has always been a shy and retiring person and was happy to let Jenny lead the band, although a knife attack on Jenny and her mother in 1994 was also said to be in part responsible for her reluctance to appear in public.[6] The attacker was a German girl, later arrested, who claimed to be targeting Linn.

In Linn's last personal television interview, from 1998,[4][7] she stated her wish to simply remain in the background, and the eight videos filmed after this interview have mostly complied with her wishes. Other promotional materials, such as album covers and inserts, also feature blurred, unsmiling, distinctly unhappy photographs of her. The Flowers album uses the infamous 'blue lines' photograph, where Linn's unhappy image is bizarrely hidden behind the booklet's blue line design.[8] Linn granted one final radio interview on Mix FM in Lebanon in 1998, where she talked about new album plans and sang All That She Wants a capella.[9]

Linn has written a number of songs, some of which have been released as Ace of Base songs, and some of which have never been released to the public. During the mid-1990s, Linn wrote and produced several songs, among them "Just 'N' Image", "Whispers in Blindness", and "Strange Ways" for the band's The Bridge album. Some fans believe Linn's odd behavior is explained in the lyrics of "Strange Ways".

In the spring of 2005, interviews with Linn's sister Jenny seemed to indicate Linn's desire to return to the spotlight again, but Linn still remained hidden from the public and has not granted an interview with any news agency or media organization since the release of the "Our Story" documentary in 1998. The public has not caught a glimpse of her in several years. Her last public appearance was during the promotion of the Da Capo album in 2002, where she showed up to a German television performance and mimed playing the keyboards in the background.[10] A fan snapped a picture of a calm, smiling Linn outside the studio. Her final appearance with Ace of Base was in the Unspeakable music video which was filmed in December 2002.

In October and November 2005, the band made appearances at a series of 15 concerts at the Night of the Proms in Belgium; as usual, Linn was unable to attend, and only Jonas, Ulf, and Jenny made appearances at these concerts.[11][12] In 2006, it was mentioned that Ace of Base had recorded 6 new songs featuring vocals by both Malin and Jenny. In 2007, Linn provided backing vocals on the track "High Life" in Jenny's secondary band Arose.

According to an interview given by Ulf Ekberg on 20 June 2006, Malin returned to the University and would record vocals on the band's new album.[13] However, on 30 November 2007, Ulf stated in an interview that Malin Berggren had left the band and she would not be featured on the band's new album. The group had already been performing mostly without Linn as a trio for a solid decade before her departure.[14] Linn's image has been removed from most material on the band's official website. Band-mate and sister Jenny confirmed Linn's departure in the Danish press: "She hasn't been part of Ace of Base for several years," she stated in Se & Hør magazine.[15]

Linn is multi-lingual: her primary language is Swedish, but she speaks fluent English and German; she also speaks Spanish, Russian and French.[16] Other details of Linn's life, such as those of her life outside the band, are completely unknown to the general publicwhereas the other band members have been open about their relationships (Jonas and Jenny both have spouses, each with children, and Ulf has three children with his long-time girlfriend).[17]

Contributions to Ace of Base music

Linn has contributed vocals for all original Ace of Base songs except:

Linn's writing credits for Ace of Base tracks:

Linn's production credits for Ace of Base tracks:

This article uses material from the article Linn Berggren from the free encyclopedia Wikipedia and it is licensed under the GNU Free Documentation License.

Forever And A Day Jesse Ritch
Update Required To play the media you will need to either update your browser to a recent version or update your Flash plugin.