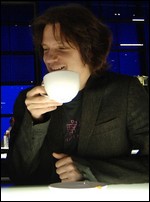 Guy Sigsworth (born June 14, 1968) is a U.K. based composer, producer and songwriter. In his career to date he has worked with many famous artists, including Seal, Björk, Goldie, Madonna, Britney Spears, Kate Havnevik, Bebel Gilberto, Mozez, David Sylvian and Alanis Morissette. He has also collaborated with many celebrated instrumental musicians, including Talvin Singh, Jon Hassell and Lester Bowie. He was previously a member of the band Frou Frou together with Imogen Heap.[1]

Sigsworth grew up in Ilkley, West Yorkshire, where he developed a youthful passion for early music, especially the 14th century composer Guillaume de Machaut. His earliest musical heroes were the multi-instrumentalist David Munrow and the maverick field-recordist and composer David Fanshawe. He was a pupil at Leeds Grammar School in the 1970s, where he and his band performed a memorable version of Red House which ended prematurely after he cut his hand rather badly on a cymbal. He studied the harpsichord, first at summer schools at the Casa de Mateus in Portugal, and later for a year at the Utrecht Conservatorium in the Netherlands. He toured Europe playing harpsichord for the European Union Baroque Orchestra.

Returning to the UK he moved to London and made a sudden change of direction. He became fascinated with the burgeoning Acid House sound, and immediately bought a Roland sampler and an Atari computer. He met Seal, co-writing four songs on Seal's debut album: "Crazy", "The Beginning", "Wild" and "Violet", plus the B-side, "Sparkle". The album's producer, Trevor Horn, was the first pop record producer Sigsworth had ever met.

Guy Sigsowrt produced early 1993 the benefit Song Survival Game for the relief organization Menschen für Menschen in Ethiopia, founded by the actor Karlheinz Böhm. The song was written by Mike Turtle and Dean Frederick. The Single Survival Game was 1995 worldwide released by BMG Ariola / Coconut Records. The remixes made by Paul Dakeyne hit the Charts in South America and Europe. The Its 5 to 12 / Survival Game project was originally initiated by the Swiss Media Manager Ditti Brook.

It was through Singh that Sigsworth met Björk, becoming keyboard player, and later music director, of her live band for two albums. Sigsworth brought his early music sensibility to Bjork's live performances and recordings, adding harpsichord, clavichord, regal and positive organ accompaniments to her music. Sigsworth's harpsichord can be heard on the song "Cover Me" from Post; clavichord on the song "All Is Full Of Love"; and organ on the song "Unravel" from Homogenic. "Unravel" was Sigsworth's first co-written song with Björk. It is, reportedly, Thom Yorke's favourite song. Sigsworth also played celesta on Björk's cover of Joni Mitchell's "The Boho Dance"; the celesta later became a feature on both Dancer In The Dark (where he also contributed a string arrangement) and Vespertine (where he co-wrote "Hidden Place", "An Echo, A Stain", "Sun In My Mouth" and "Harm Of Will".

Sigsworth first met Imogen Heap in 1996 after a friend played him a demo of her song "Come Here Boy". He immediately fell in love with her distinctive voice. He was also amazed to hear that she shared his idiosyncratic love of melodies featuring wide, angular intervals - especially major 7ths and minor 9ths - which are not so common in pop. They wrote two songs together, "Getting Scared" and "Airplane", which Sigsworth produced for her debut album, I Megaphone. In return, Heap sang backing vocals on Sigsworth's band project with Alexander Nilere, Acacia.

Sigsworth co-produced the 1998 Mandalay album Empathy, which attracted the attention of Madonna. This in turn led to him co-writing the song "What It Feels Like For A Girl" with Madonna, for her 2000 album Music. Sigsworth also wrote the song "Nothing Fails" with Jem for Madonna's 2003 album American Life.

One night in Mumbai, India, where he was producing a song for UK Asian artist Amar, Sigsworth composed a tune on his Yamaha QY20 pocket sequencer. As soon as he arrived back in London, he took it to Imogen Heap, and asked her to write a top line for it. It became "Flicks", their first song for what would become the Frou Frou album Details. Originally there was no plan for Sigsworth and Heap to form a "proper" band. It was simply a matter of Sigsworth wanting to hear various song ideas properly realized. As Heap says: "Every month or so Guy would phone me up and say 'I've got a new song, would you come in and sing it?' and then before we knew it we'd already started the album."

As a linking concept for the emerging set of songs, Sigsworth suggested two ideas for the lyrics:

After eleven songs had been completed, Heap and Sigsworth set about finding a name for their collaborative effort. Sigsworth, a fan of all things French, came up with "Frou Frou", which Heap loved. The name comes from Rimbaud's 1870 poem "Ma Bohème", and is a French onomatopoeic word originally meaning the swishing noise made by skirts on dancing women. The album title, "Details", was a reference to the way the songs were constructed in the studio, by layering momentary details of sounds and performances to create a web of sound.

The album was released in 2002 on Universal Records. It was critically acclaimed, but did not achieve mass sales. "Breathe In" was released as the first single internationally, and reached number two on the Italian radio airplay charts, but follow up singles, "Must Be Dreaming" and "It's Good To Be In Love" were never commercially released in the UK. A video was also made for "The Dumbing Down of Love", directed by Joel Peissig (who later directed Heap's solo video, "Hide and Seek"). After touring the record extensively across the United States, where the duo had established a cult fan base, Frou Frou disbanded in 2003.

Heap and Sigsworth temporarily reformed Frou Frou to record a cover version of "Holding out for a Hero", originally recorded by Bonnie Tyler, for the Shrek 2 soundtrack. The duo were approached by the music director of the film, who had been a fan of their album. The resulting track is played during the end credits of the film. Frou Frou also experienced a resurgence in popularity in 2004, when Scrubs star, Zach Braff chose album track "Let Go" for his independent film, Garden State. Other Frou Frou tracks have been included on television shows, such as CSI and Roswell High.

Despite disbanding only after one album (Heap and Sigsworth remain firm friends and meet regularly to catch up on things, but are currently focused on separate musical projects), Frou Frou's musical influence has remained widespread and both Heap and Sigsworth have seen an increase in interest in their projects post-collaboration.

Since Frou Frou, Sigsworth has returned to producing and co-writing for other artists.

Sigsworth has produced several tracks for Britney Spears. The first, "Everytime", appeared on her US number-one album, In the Zone and, when released as the third single from the album, reached number one in the UK and Australian singles charts, as well as number fifteen in the US Billboard Hot 100. In 2005, Sigsworth and Spears collaborated on a song Spears had written about having a child, "Someday (I Will Understand)". A track Imogen Heap and Sigsworth had worked on for the In the Zone album, entitled "Over to You Now", was also released on the UK and Japanese bonus CD EP Chaotic of the DVD release of her reality TV show, Britney & Kevin: Chaotic, as well as on the Japanese "Someday (I Will Understand)" single. More recently Sigsworth produced the song "Out from Under", and co-wrote and produced the song "My Baby", for Spears' 2008 album Circus. He was not asked back to commence work on Spears' 2011 album.

Sigsworth produced two songs for Robyn's 2002 album Don't Stop The Music: "Should Have Known" and "Blow My Mind".

Sigsworth produced the song "It's Better To Have Loved", and co-wrote and produced the song "Winter's Coming" for Temposhark's 2008 debut album The Invisible Line. Sigsworth's former engineer and collaborator Sean McGhee produced nine songs on the album.

Sigsworth has remixed a song by Hong Kong-based actress and singer-songwriter Chelsia Chan. The songs' lyrics are a Mandarin-language adaptation of a poem by Elizabeth Barrett Browning.

Sigsworth produced the vocals on Josh Groban's single "You Are Loved (Don't Give Up)", taken from his 2006 album Awake.

Sigsworth has worked extensively with Norwegian singer-songwriter Kate Havnevik. On her first album, Melankton (2006), Sigsworth co-wrote and produced three tracks, including the single, "Unlike Me" (which was featured in an a cappella version on the US hit TV show Grey's Anatomy), "Not Fair" and "You Again." Another Sigsworth collaboration, entitled "So:Lo", was released on iTunes in late 2006, and appeared on the USA version of Melankton in 2007. Sigsworth has recently been working on Havnevik's second album.

Sigsworth produced and co-wrote the music for the whole of Alanis Morissette's 2008 album Flavors of Entanglement.

Sigsworth wrote a song called "Closer To You" with Bebel Gilberto and produced it for Vanessa Williams' eighth studio album The Real Thing.

Sigworth is writing and recording with Alison Moyet for her new album due in 2012.

This article uses material from the article Guy Sigsworth from the free encyclopedia Wikipedia and it is licensed under the GNU Free Documentation License.

I'm Sorry Tempesta feat. Rachel Williams
Update Required To play the media you will need to either update your browser to a recent version or update your Flash plugin.