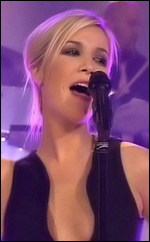 Heidi India Range (born 23 May 1983) is an English singer-songwriter. She is best known for being a former member of the group Sugababes. Range was an original member of girl group Atomic Kitten, although she left the group two years before releasing any material. In 2001 Range replaced Siobhán Donaghy of the Sugababes and had accumulated six UK number one singles as well as two number one studio albums with the group before splitting in 2011. Range has since concentrated on theatre work.

In 1997, Range auditioned for a part in the group Scooch, but was rejected as she was too young.[1] Instead, she joined Atomic Kitten, a girl group founded by OMD frontman Andy McCluskey, along with Liz McClarnon and Kerry Katona. She recorded several demos and tracks with the group. In 1999 Range decided to leave the group after wanting to pursue a more R&B style of music instead of the pop music Atomic Kitten were making and was therefore replaced with Natasha Hamilton.

Having already started work on a second album with new member Range, Sugababes looked for a new record label, eventually signing to Island Records. Their first single on the new label, "Freak like Me" scored the group their first UK number 1 single. Follow-up single "Round Round" also debuted on top of the UK Singles Chart and peaked at number 2 in Ireland, the Netherlands and New Zealand. Both singles were certified silver by the BPI.[2] On the back of the success of the singles, the group's second album, Angels with Dirty Faces, debuted at number 2 on the UK Albums Chart and was later certified triple platinum, selling almost a million copies in the UK alone.[2][3] It is to date their highest-selling album.[4] In the UK, the third single from the album, a ballad titled "Stronger", gained the girls their third consecutive top ten hit in their native country. The track was released as a double-A side with "Angels with Dirty Faces" in the UK, the latter song chosen as the theme tune to The Powerpuff Girls Movie. A fourth single, the Sting-sampling "Shape", made the top ten in the Netherlands and Ireland in early 2003.

After a hiatus, the Sugababes released their thirteenth single, "Push the Button" in October 2005. The song debuted at number 1 in the UK and remained in the position for three consecutive weeks.[5][6] It also peaked at number one in Ireland,[7] Austria[8] and New Zealand,[9] and reached the top three across Europe and in Australia.[10] Certified silver in the UK,[2] it was later nominated at the BRIT Awards for Best Single. Parent album Taller in More Ways became the group's first UK number 1 album. The group was number 1 on the singles, album, airplay and download charts simultaneously, making them the first girl group to achieve such a feat.[11] Taller in More Ways was certified double platinum in the UK.[2][3]

Following an apparent illness that prevented Buena from promoting follow-up single "Ugly",[12] it was announced on 21 December 2005 that Buena had left the Sugababes. According to an announcement on their official website, Buena's decision was based purely on personal reasons following the birth of her daughter.[13] Amelle Berrabah joined the Sugababes in late December 2005, having been chosen by the group's management to replace Buena.[14]

The third single from Taller in More Ways was a re-recorded version of "Red Dress", which was released in early 2006, and gave the Sugababes their third consecutive top five hit from the album, entering the UK Singles Chart at number 4.[15] Berrabah re-recorded three of the album's twelve tracks and co-wrote a new song with Keisha Buchanan and Range named "Now You're Gone". The tracks appeared on a re-release of Taller in More Ways that reached number 18 on the UK Albums Chart.[16] The fourth and final single from Taller in More Ways was "Follow Me Home", released only in the UK in June, where it charted at number 32.[17]

In the 2009 edition of the Guinness Book of World Records, "About You Now" was listed as the "first track by a British pop act to top the singles chart solely on downloads". The song was also named as the "biggest chart mover to the number one position in the UK".[18]

After the release of "No Can Do", the group announced that there would be no 2009 tour in support of Catfights and Spotlights so that they could focus on writing and recording material for their seventh studio album. The Sugababes travelled to the United States to work on their seventh studio album, Sweet 7.[19][20] In April 2009, the Sugababes signed a contract with Jay-Z's label Roc Nation,[21] resulting in working with high-profile producers.[21] Berrabah also collaborated with Tinchy Stryder for the track "Never Leave You", the third single from his second album, Catch 22 in August 2009. The single debuted on top of the UK charts,[22] making Berrabah the only member of the Sugababes, past and present, to achieve a number one single outside of the group. The lead single from Sweet 7, "Get Sexy", debuted at number 2 on the UK Singles Chart in September 2009.[23] In September 2009, Berrabah was reported to have left the Sugababes.[24] She had missed two engagements promoting Sweet 7. However, on 21 September, it was revealed that Buchanan, the sole original member of the group, had left the Sugababes.[25] Buchanan's place was filled by Jade Ewen, the UK's 2009 Eurovision Song Contest entrant. On 21 September 2009, it was officially announced that Buchanan had exited the group,[26] resulting in Sugababes retaining none of its original members. Buchanan was replaced by former-Eurovision entrant Jade Ewen. Buchanan revealed on Twitter that it was not her decision to leave,[27] resulting in some journalists describing her as having been "sacked".[28] However, Berrabah and Range admitted that they played no role in Buchanan's departure. Both women had attempted to quit the Sugababes themselves only to find that their group's management decided that they would follow them, rather than find two new members for Buchanan.[29]

On 1 July 2011, Buchanan approached the current line-up of Sugababes at the Barclaycard Wireless festival in London, where the girls were reported to have a "tear-eyed" reunion and put the past behind them.[30] It was the first time in two years that Buchanan had seen former bandmates Heidi Range and Amelle Berrabah. It was also the first time Buchanan had officially met her 'replacement' Jade Ewen.[31] The new member, Ewen, was flown to the United States to film the music video for single "About a Girl" mere days after it was announced that Buchanan had left the group.[32] "About a Girl" reached number 8 in the UK,[33] during a truncated promotion schedule due to Berrabah flying to Austria for treatment for nervous exhaustion resulting from the line-up change.[34] In late 2009, "Wear My Kiss" was confirmed for release in February 2010 as the third single,[35] with the album, originally set for a late November 2009 release, delayed until March 2010.[36] "Wear My Kiss" debuted and peaked at number 7 in the UK,[37] making Sweet 7 the Sugababes' first album since Taller in More Ways to contain at least three top ten hits. The album debuted and peaked at number 14 in the UK.[38]

In March 2010, former group member Mutya Buena applied to the European Trademarks Authority for ownership of the group's name. The application was submitted amid the controversy of Buchanan's departure, in which Buena insisted that "the Sugababes have ended" without a founding member still in the group.[39] It was confirmed that Buena had obtained rights to use the name on paper, cardboard and goods; namely stationery, paper gift wrap and paper gift wrapping ribbons.[40][41] It was also revealed in the same month that they were dropped by Roc Nation, due to poor sales of Sweet 7.[42][43][44][45] In 2011 Sugababes released the lead single from their new album called Freedom which was released as a free download. The group later disbanded.

Range appeared on the 2012 series of ITV1's Dancing on Ice.[46] Her partner was due to be Sylvain Longchambon, but after he pulled out with an arm injury she was partnered by Russian ice skater, Andrei Lipanov. In January 2012, Heidi Range revealed she'd been considering recording a solo album.[47] On 19 February 2012, Range and Sebastien Foucan were eliminated in a double elimination. In June 2012, Range announced the Sugababes were currently in the studio writing material, but have no plans to release any in the near future.[48]

On 22 June 2012, Berrabah revealed that the then current Sugababes lineup was planning to release new music at "the end of next year".[49] On 25 June 2012, Range confirmed that the current lineup was writing in the studio, but had no plans to release any material in 2012.[50] On 20 July 2012, Jade Ewen confirmed the group was working on a new album, and told STV "We have all been working on Sugababes material, nothing has been finalised in terms of the album, so we'll just keep on going."[51] On 15 March 2013, Ewen confirmed the band would record new music "before the end of the year", stating: "I think we will probably come back together again at the end of the year. There will definitely be more recording, but there is no release date anytime soon."[52]

On 18 December 2012 it was reported that Range would be joining the Spice Girls and replacing Victoria Beckham, however Emma Bunton and Range quickly denied the rumours with Bunton saying "None of the Spice Girls would ever or could ever be replaced, nonsense in the papers" with Range adding "Ahh and there was me all getting ready to be Suga Spice, haha x".[53][54] In March 2013 it was announced that Range would appear on Totally Senseless, an ITV1 series as a team captain with Brian Dowling and Steve Jones as hosts. The series was not picked up by ITV.[53][55] Range took part in the 8th series of Celebrity MasterChef, aired in summer 2013, but was the first to be eliminated.

She appeared as the lead female role of Pinky Tuscadero in a Happy Days musical touring the UK.[56]

From February 2016 she appeared in the West End musical The War Of The Worlds as Beth.[57]

Range was engaged to MTV and Capital London presenter Dave Berry, who proposed to her on New Year's Eve while on holiday in India.[58] Range had stated her intentions to marry in the winter of 2012,[59] but on 10 December 2011, Range revealed that the couple had separated after eight years together.[60] Heidi married Alex Partakis in Florence on 3 September 2016. On 31 July 2017 Range confirmed on her official Twitter post that she was expecting her first child. On 21 January 2018, she and her husband, welcomed their first child, Aurelia Honey Partakis.[61]

This article uses material from the article Heidi Range from the free encyclopedia Wikipedia and it is licensed under the GNU Free Documentation License.

On My Way In L.A. Phil Carmen
Update Required To play the media you will need to either update your browser to a recent version or update your Flash plugin.