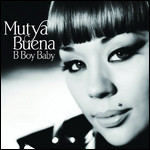 Dorothy Isabel Mutya Buena (born 21 May 1985) is a British singer and songwriter who rose to fame as a member of girl group the Sugababes. With the Sugababes, Buena had four UK number one singles, an additional six top-ten hits and three multi-platinum albums. After leaving the group in December 2005, she released her debut solo album, Real Girl in June 2007. In October 2010, Buena released a compilation album dedicated to British singers, titled Sound of Camden: Mutya Buena.

Buena was born in Kingsbury, London and attended Kingsbury High School.[3] Her father is Filipino and her mother is of Irish descent.[4] On 23 March 2005, Buena gave birth to her daughter Tahlia. Buena dedicated a song to her late sister Maya on the Sugababes album, Three.[5]

The Sugababes were formed in 1998 by Siobhán Donaghy, Keisha Buchanan and Buena. Their debut album, One Touch, was released in November 2000 and peaked at number twenty-six on the UK Albums Chart, eventually earning a gold certification.[6][7] One Touch spawned four singles, three of which reached the top twenty,[6] while the album's lead single "Overload" was nominated for a BRIT Award for "Best British Single".[8] The album's sales did not meet the expectations of London Records and the group was subsequently dropped.[9] The group's second album Angels with Dirty Faces was released in August 2002 through Island Records. Influenced by the new wave, dance, and pop music of the 1980s, the record enjoyed success in the UK, where it reached number two and went triple platinum.[6][7] It produced two number one singles and was nominated for "Best British Album" at the 2003 BRIT Awards.[6][10]

Three, Sugababes' third album, was released in October 2003. It reached number three in the UK and produced four singles, all of which reached the top ten.[6] The group's fourth album, Taller in More Ways, was released in October 2005. The album reached number one and went double platinum in the UK.[6][7] On 21 December 2005, it was announced Buena left the Sugababes. According to an announcement on their official website, "[Buena]'s decision was based purely on personal reasons and she will continue to remain the best of friends with both [Buchanan] and [Range]". The last remaining original member, Buchanan, said upon Buena's departure, "...we will all miss Mutya, but we also knew there was still a place for bringing in somebody new who could help us carry on taking the Sugababes brand of music forward"[11] Amelle Berrabah joined the group 48 hours after Buena's departure.[12]

Following her departure from the Sugababes, Buena began working on her debut album in early 2006 after signing with her previous label, Universal Island Records. She also contributed vocals to the album Soundboy Rock by Groove Armada.[13] The first single to be released in the UK featuring Buena was a ballad duet with George Michael, titled "This Is Not Real Love". It was released in November 2006 and reached number 15 in the UK. Preceding the album, the title track, "Real Girl", was released in early 2007. It reached number 2 in the UK and received a BRIT Award nomination for "Best Single". The song samples Lenny Kravitz's hit "It Ain't Over 'Til It's Over", and was produced by London-based production company Full Phat. "Real Girl" was also featured on the Sex and the City, Vol 2: More Music Soundtrack. Buena's debut album, Real Girl, peaked at number 10 on the UK Albums Chart. "Song 4 Mutya (Out of Control)", her collaboration with dance duo Groove Armada, was released in the UK in July 2007 peaked at number 8. The fourth release from the album was "Just a Little Bit", which reached number 65. Buena also collaborated with Amy Winehouse, on a re-working of the track "Be My Baby" by The Ronettes titled "B Boy Baby", which reached number 73 in the UK top 75. On 1 October 2007, Buena was nominated for the 2007 British "Music of Black Origin" (MOBO) awards at the O2 Arena in London.[14]

On 12 February 2008, Buena was dropped by her record label due to poor sales and charting positions from Real Girl and her last two singles, "Just a Little Bit" and "B Boy Baby".[15]

In October 2008, Buena appeared on Alan Carr's Celebrity Ding Dong. In January 2009, Buena featured on Asher D's second single "With You", from his album Ashley Walters, as well as the Don-E track "The Time Is Now". She also promoted the collaborations "Fallin'" with Agent X and "Give Back" with Tah Mac. Buena also joined an array of UK, US and Jamaican artists to feature on the debut single of the London-based Urban / Funky House production duo, NightShift. The song is titled "Can You Persuade Me" and it also features MegaMan (So Solid Crew), DJ Ironik, Sisqó, Tanto Metro & Devonte, TQ, Steelo, Juxci D, J2K, Wretch 32, Sam Obernik and Mr. Vegas. After rejection from Buena, the song was then recorded by Pitbull "I Know You Want Me (Calle Ocho)".

In September 2010, she contributed to six tracks on the album The Sound of Camden, which was recorded in Israel with music producer Roy Sela. The album deals with Camden Town market in London, and has been available for purchase solely at the market itself, as well as on iTunes. She recorded a series of covers of rock songs from rock bands such as U2, The Pixies and Iron Maiden, in a chilled-out-lounge style.[16] In October 2010, Buena confirmed she was no longer interested in a career in the music industry and that she is currently training to become a psychologist for children.[17] Despite the announcement, Buena teamed up with City Boy Soul, a band consisting of ex-Damage singer Coree Richards and British rapper Gak Jonze, and digitally released "Be Ok" in January 2011. Buena also recorded lead vocals for "Give Me Love", penned by UK DJ/Producer Paul Morrell. Mutya is set to release "My Love" featuring Thor Alaye in early 2012. And "Bedroom" featuring Shide Boss some time in 2012. Buena performed at Birmingham Gay Pride on 28 May 2011.[18] In 2011, A demo by Mutya was released on soundcloud, called All B4.

In October 2011, several news outlets reported that the original line-up of the Sugababes would reform.[19][20][21] In January 2012, further circulations that the group would reunite were sparked, after both Buena and Buchanan tweeted that they were in the studio with "two other females" and British rapper Professor Green.[22] However, Buena later denied this on Twitter, saying: "No track [with] keisha or professor G he was around tha studio. im jus workin on my stuff @ tha moment. (sic)"[22] Despite this, Scottish singer-songwriter Emeli Sandé confirmed to MTV UK that she had written new songs for Buena, Buchanan and Donaghy, saying: "Yes, that is true. I've written for the original line-up of the Sugababes, which I’m very happy about because I just loved them when they first came out. I loved their sound, it was so cool. It was very different, so I’m happy to kind of be involved in what started the whole Sugababes journey. It sounds amazing."[23] In April 2012, it was reported that the line-up had signed a £1 million record real with Polydor Records.[24] In June 2012, Donaghy confirmed on Twitter that new music would be released, saying: "the soonest it'll be is in 2 weeks. The latest is 10 weeks."[25]

In July 2012, it was officially confirmed that the group had reformed under the name Mutya Keisha Siobhan and were writing songs for a new album under Polydor.[26] The name was officially registered through the European Union on 27 June 2012.[27]

In March 2017, Mutya started her own agency along with some friends. The new agency called Colour of Musiq is looking for musicians all over the UK.

Mutya is featuring on the track called “Game Over” with Rockwell, JSTN and Rico Flames. The single is sit to release on 12 April, 2018. She will also be featured in the upcoming music video.

In 2018, Buena began undertaking various television projects in a bid to return to the spotlight. She appeared in an episode of MTV’s Just Tattoo of Us before being announced as a cast member for series 5 of Celebs Go Dating on E4.[28] She is also set to appear in the comeback series of “Celebrity Coach Trip” later in the year.[29][30]

In March 2010, Buena filed a claim for ownership of the Sugababes name with the European Trademark Authority. Though Buchanan and Donaghy's names appear on the trademark submission, it was confirmed that Buena was the sole applicant for submission and Donaghy and Buchanan were not involved.[31] The fourth line-up launched an opposition to the claim on the basis that goodwill and reputation in the mark and trading name "Sugababes" belongs to the partnership – not an individual.[32]

In September 2014 Buena was declared to be bankrupt by a High Court judge.[35]

This article uses material from the article Mutya Buena from the free encyclopedia Wikipedia and it is licensed under the GNU Free Documentation License.

Couleur argent Perrine Hope
Update Required To play the media you will need to either update your browser to a recent version or update your Flash plugin.