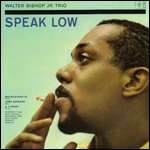 After studying at The Juilliard School with Hall Overton in the late 1960s, he taught music theory at colleges in Los Angeles in the 1970s. In 1983 he began teaching at The Hartt School of the University of Hartford. He also wrote a book, A Study in Fourths, about jazz improvisation based on cycles of fourths and fifths.

This article uses material from the article Walter Bishop, Jr. from the free encyclopedia Wikipedia and it is licensed under the GNU Free Documentation License.

Dream On Nazareth
Update Required To play the media you will need to either update your browser to a recent version or update your Flash plugin.