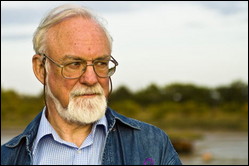 John McCabe was born in Huyton, Liverpool, Merseyside. A prolific composer from an early age, he had written thirteen symphonies by the time he was eleven (Rickards 2001). After studies in Manchester and Munich he embarked upon a career as a composer and virtuoso pianist (he still tours internationally as a recitalist). He has worked in almost every genre, though large-scale forms lie at the heart of his catalogue with seven symphonies, fifteen concertante works and eight ballet scores to his name. Like many composers of his generation, McCabe experimented with serialism in his early career but his mature style is characterised by a dramatic post-tonalism, and vivid orchestrations.

John McCabe was made CBE in 1985 for his services to music (Rickards 2001). He has also spent a considerable amount of time teaching. Among his notable pupils is composer Gary Kulesha.

This article uses material from the article John McCabe (composer) from the free encyclopedia Wikipedia and it is licensed under the GNU Free Documentation License.