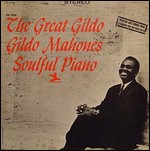 Early in his career, Mahones played with Joe Morris (1948) and Milt Jackson. He served in the Army during the Korean War and then played with Lester Young from 1953 to 1956. Later in the 1950s he toured with the Jazz Modes (whose members included Charlie Rouse and Julius Watkins), Sonny Stitt, and Benny Green. From 1959 to 1964 he played behind Lambert, Hendricks & Ross.

When LHR split, Mahones relocated to Los Angeles where he worked both as a studio musician and as a jazz sideman. He led his own trio, and appeared on recordings by O.C. Smith, Lou Rawls, James Moody, Harold Land and Blue Mitchell, Leon Thomas, Jim Hall, Big Joe Turner, Lorez Alexandria, Benny Carter, Pony Poindexter, Booker Ervin, and Jimmy Witherspoon.

This article uses material from the article Gildo Mahones from the free encyclopedia Wikipedia and it is licensed under the GNU Free Documentation License.

Let Me Live Queen
Update Required To play the media you will need to either update your browser to a recent version or update your Flash plugin.