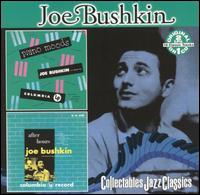 Born in New York City, Bushkin began his career by playing trumpet and piano with New York City dance bands, including Frank LaMare's Band at the Roseland Ballroom in Brooklyn. He joined Bunny Berigan's band in 1935, played with Eddie Condon from 1936-37, and with Max Kaminsky and Joe Marsala, before rejoining Berigan in 1938.[1][2] He then left to join Muggsy Spanier's Ragtime Band in 1939. From the late 1930s through to the late 1940s he also worked with Eddie Condon on records, radio and television. After service in World War II he worked with Louis Armstrong, Bud Freeman and Benny Goodman.[1]

He married Francice Netcher, elder sister of socialite Mollie Wilmot. The couple had four children – Nina, Maria, Terasa, and Christina. They lived in Santa Barbara, California, on a ranch. The daughters rode horses and jumped in horse shows around the country. Joe had 6 grandchildren Chris, Alex, Charles, and James Merrill and Marissa and Dillon Stave.

His best-known composition might be "Oh! Look at Me Now",[1] with John DeVries, written when he worked in Tommy Dorsey's band. That song would become Frank Sinatra's first hit. In his 60s, Bushkin's semi-retirement was ended by an offer from Bing Crosby for them to tour together in 1976 and 1977; Bushkin also appeared on Crosby's 1975 Christmas TV special with Fred Astaire. He also performed in a concert series at New York's St. Regis hotel in 1984 that celebrated his 50 years in show business.[1]

Bushkin died in Santa Barbara, California, in 2004. "He had hoped to live to 88, as a piano had 88 keys", said his son-in-law Bob Merrill, a trumpet player who performed with Mr. Bushkin for the last 15 years.[1]

This article uses material from the article Joe Bushkin from the free encyclopedia Wikipedia and it is licensed under the GNU Free Documentation License.