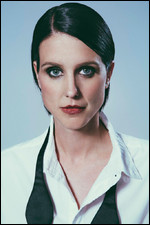 Heather Peace was born in Bradford, West Yorkshire. She has been playing piano since she was six years old, and guitar since her teens. Peace decided to be an actress at an early age and credits her parents for the encouragement they gave her to achieve that goal.[2]

Peace studied acting at Manchester Metropolitan University, where she obtained a BA (Hons).

Peace's break into television came when she joined Emmerdale, playing the character Anne Cullen from 1996 to 1997.

Her first professional stage role was in the 1997 Harrogate Theatre production of My Fair Lady, playing Eliza Doolittle. She subsequently has played Miranda in Shakespeare's The Tempest and the same character in the actor-musician spoof Return to the Forbidden Planet.[3]

After leaving Emmerdale, Peace took parts in The Bill and Dangerfield, before being cast as Firefighter Sally "Gracie" Fields in the ITV series London's Burning from 1998 until the programme's cancellation in 2002.[4] During this time, Peace made a TV movie called Thunder Road, in which she played Sonia.

Between 2003 and 2005, Peace played minor roles in television series including Casualty and Where the Heart Is.

Peace played Special Air Service Trooper Becca Gallagher on the ITV action series Ultimate Force alongside Ross Kemp. Becca was part of the 3rd and 4th series, aired between 2005 and 2008. Peace has given credit to the writers for making Becca 'one of the lads', rather than an overly emotional character and said she had 'so much fun' playing the hero in the show.[5] Ross Kemp has argued the show is made far more interesting by including a female role and believes Peace was the perfect choice for the part ("she is absolutely superb").[6]

During 2006 and 2007, Peace starred in Kay Mellor's TV series The Chase as single mum Fiona Jones. Quite a different character to the action girls often played by Peace, Fiona is portrayed as a left out family member whose resentment and betrayals lead into unexpected sinister behaviour.[7]

She then appeared in television series including Coronation Street, Heartbeat and Holby City. In 2008, Peace appeared as the secretly abusing wife in the "Private Sins" episode of Blue Murder.

She also starred in the film 31 North 62 East where Peace plays again part of a Special Air Service unit. Peace is Captain Jill Mandelson, who will seek help in her twin Kimberly (also played by Peace) to unfold the political corruption that lead to the death of the rest of her unit.[8]

In 2010, Peace was cast as Detective Sergeant Sam Murray in the BBC Three TV series Lip Service. Peace argued that being the only openly lesbian cast member influenced the attention she received regarding the show.[9] The series, written by Harriet Braun, revolves around the loves and lives of group of aged-30-something lesbians in Glasgow, Scotland. The show reached cult status within the first few episodes,[10] with Peace's character Sam, and the actor herself, becoming also the object of cult ("Team Sam" movement among fans of the show).[11] Filming of the second series finished in July 2011 with a transmission date of spring 2012.[12]

In 2011, Peace was cast as Head of English, Nikki Boston before being appointed Deputy Headteacher in 2013 for the BBC One school-drama Waterloo Road.[13] Following a tour of her debut album, she returned to the series for the second part of Series 8. She also featured in Series 9, which screened on BBC One in September 2013. She took another break from Waterloo Road at the end of series 9 Spring Term but has hinted that she may return in Series 11. However, it is unlikely she will return, due to the show's tenth season being its last.

In 2016 she appeared in the BBC TV series The Coroner episode 2.3 "Those in Peril" as Chrissy Woodward.

Peace was classically trained at piano since she was six years old, and later learned guitar.[15]

She held a jazz residency at Velvet while she attended drama school.[16]

In a 2000 episode of London's Burning, Peace's character sang a version of the Bette Midler classic The Rose. Subsequently, released by BMG, it reached no. 56 in the UK charts. She decided to put her music career on hold to concentrate on acting but in 2011 she reignited her love of music with her first sell out UK tour and release of an acoustic album of covers and some original songs.

She recorded her full debut jazz album Fairytales with producer Nigel Wright.[17] Following release on 21 May 2012, it achieved number 43 in the UK Albums Chart and number 9 in the independent albums chart, supported by a UK tour. Heather's Fairytales UK tour culminated with a concert in London, where Peace shared a duet with Alison Moyet.[18]

In 2013 she released a new single, a Jack Guy remix of "Fight For" available on iTunes, and a special edition of her debut album "Fairytales". She has toured Australia twice,[19] where she has taken part in the Sydney Mardi Gras performing on stage as well as hosting the event for the SBS TV.[20]

On 9 June 2014, the single "We Can Change", and her second studio album The Thin Line were officially released. Peace launched the new single with Europe´s first rainbow crossing, in Brighton.[21]

All the songs in "The Thin Line" (as well as her previous studio album, Fairytales) are written by Peace. Some of the tracks, however, are the result of a joined work with other songwriters. Such is the case of the single "We Can Change", written by Peace and Shelly Poole, or the song "Lily" (freely available to download from her official website), a co-write by Peace and her guitarist Michael Clancy.[22]

Peace worked in this new album with producer James Lewis, both having a "duty of care" on it.[23] Her focus on her music (she took a break from acting), as well as the extensive work on the album, that did not finish until they both (musician and producer) were perfectly satisfied with it, concluded in The Thin Line, an album she is incredibly proud of.[24]

Following the release of the album, Peace performed in a number of festivals over the summer. The Thin Line tour, during which Peace and her band performed the songs from the new album, took place in October 2014.[25] An acoustic tour followed in March / April[26] and September / October 2015.[27]

Heather announced her plans for a new EP, as well as a European and a full band UK Tour in Spring 2016.[28]

In February 2016, Heather launched a PledgeMusic project for the release of her new EP, Come Home.[29] The support of her fans led to raising 75% of the funds in 24 hours, reaching the project target in under a week.[30] The Come Home EP was released on 8 April 2016.[31]

For her new EP, Heather chose to work again with her producer from The Thin Line, James Lewis, and has said James brings out the best in her.[32] Heather described Come Home as a love story, from meeting to breaking up, in 20 minutes.[33]

Peace came out as a lesbian to her mother when she was 19 years old, shortly after she broke up with her first girlfriend.[34] Peace and longtime partner Ellie Dickinson entered into a civil partnership in 2013, and subsequently converted it to marriage in 2014. They have three daughters together, Annie Mary, born to Dickinson in April 2015,[35][36] and twins Jessie and Lola, born to Peace in June 2017.[37]

Peace is a prominent supporter of LGBT equality causes. She is a patron of Manchester Pride and has recorded a video for Stonewall's "It Gets Better" campaign.[38] She is involved in a number of related charities, including Diversity Role Model s[39] and The Albert Kennedy Trust.[40]

Peace has hosted and curated her own "Heather Peace Presents" stage in several editions of Manchester Pride.[41] In July 2016 Diva announced Peace as its new columnist. Peace said it was an honour for her to be part of a magazine that was relevant to her coming out.[42]

This article uses material from the article Heather Peace from the free encyclopedia Wikipedia and it is licensed under the GNU Free Documentation License.