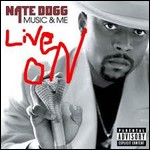 Nathaniel Dwayne Hale (August 19, 1969 March 15, 2011), better known by his stage name Nate Dogg, was an American rapper, singer, and actor. He was noted for his membership in rap trio 213 and his solo career in which he collaborated with Dr. Dre, Eminem, Warren G, Tupac Shakur, Westside Connection and Snoop Dogg on many hit releases. Nate Dogg released three solo albums, G-Funk Classics, Vol. 1 & 2 in 1998, Music and Me in 2001 and Nate Dogg in 2003.

Nate Dogg died in 2011 in Long Beach, California of complications from multiple strokes.[1]

Nate Dogg was born in Clarksdale, Mississippi on August 19, 1969. He moved to Long Beach, California when he was 14 following his parent's divorce. He was friends with rappers Warren G, RBX, and Daz Dillinger and cousin of Butch Cassidy, Snoop Dogg, and Lil' ½ Dead. He began singing as a child in the New Hope Baptist Church in Long Beach and Life Line Baptist Church in Clarksdale, Mississippi where his father Daniel Lee Hale was pastor. At the age of 17 he dropped out of high school in Long Beach and left home to join the US Marine Corps,[2] serving for three years.

In 1990, Nate Dogg and Snoop Dogg,[3] and their friend Warren G, formed a rap trio called 213. 213 recorded their first demo in the back of the famed V.I.P. record store in Long Beach, the demo was later heard by Dr. Dre at a house party and he was instantly hooked on the soulful voice of Nate.

Nate Dogg made his debut on The Chronic. Singing in what later became his trademark style, he was well received by fans and critics alike, and would go on to sign with Death Row Records in 1993. Nate Dogg was also featured on Mista Grimm's "Indosmoke" with Warren G. Then in 1994 he produced his first hit single "Regulate" with Warren G. Nate Dogg was also featured in many Tupac releases, including his collaboration record Thug Life: Volume 1. Then in 1998 after a tumultuous time at Death Row Records he released another album. The double album was titled G-Funk Classics Vol. 1 & 2 and was followed up in late 2001 with Music & Me on Elektra Records. Music & Me peaked at number three on the Billboard hip-hop charts in 2001.[4] After a number of delays and an original release date of April 2004, his self-titled album was released under the Affiliated Entertainment Group on June 3, 2008. In the first half of 2014 his final studio album Nate Dogg: Its A Wonderful Life will be released by Seven Arts Music and United Media and Music Group. The album will feature unreleased material from Nate as well as appearances from Eminem, Dr. Dre, Snoop Dogg, Mary J. Blige and Jay-Z.[5]

In 2002, Nate Dogg appeared on a celebrity episode of the Weakest Link, making it to the last three players before being eliminated by Xzibit and Young MC.[6]

Nate Dogg found success, not only in solo projects, but in collaborations with other hip-hop artists. In the 2000s, Nate's high-ranking collaborative singles, according to Rolling Stone, includes 2Pac's "All bout U", Dr. Dre's "The Next Episode," Westside Connection's "Gangsta Nation," Mos Def's "Oh No," Fabolous' "Can't Deny It," Ludacris' "Area Codes," 50 Cent's "21 Questions," Kurupt's "Behind The Walls", Mark Ronson's "Ooh Wee," Houston's "I Like That," Eminem's "'Till I Collapse" and "Shake That", and Mobb Deep's "Have a Party."[7]

In the early 1990s, Nate Dogg was arrested and charged with two separate robberies. Nate Dogg was charged with the Check Changers robbery in 1991 and with the robbery of a San Pedro Taco Bell in 1994.[8][9] He faced a maximum of nearly eleven years in prison,[10] but was subsequently acquitted of both charges.[9][10]

In 1996, Nate Dogg was convicted of a drug-related offense in Los Angeles County.[11]

On June 17, 2000, Nate Dogg was arrested for allegedly kidnapping and assaulting his former girlfriend and set fire to her mother's car in Lakewood. He was then arrested by a SWAT team at his home in Pomona. He was accused of kidnapping, domestic violence, making terrorist threats and arson.[12] He spent a night in the Twin Towers Correctional Facility in Los Angeles before he was released on a $1 million bail.[13] These charges were later dismissed, but Hale faced jail time for a new charge, illegal possession of a firearm by felon. An unmarked firearm was found in his home during the June 17 arrest.[11] Hale pleaded no contest to the misdemeanor charge, and was sentenced to probation of three years and ordered to pay a $1,000 fine.[14]

On April 12, 2002, Nate Dogg was arrested when he was stopped by Arizona Department of Public Safety officers outside of Kingman, Arizona while traveling on a tour bus. He was arrested and charged with firearms-related and drug-related offenses after two pistols and four ounces of cannabis were found. Nate Dogg was booked on Mohave County Jail and subsequently released on a $3,500 bond.[15] Weapon charges against him were dropped as an exchange to guilty plea to drug possession charge. Nate Dogg was subsequently sentenced to probation and community service. He was also ordered to attend drug counseling sessions in May 2002.[16]

In 2006, Nate Dogg was arrested and charged with misdemeanor aggravated trespassing, telephone harassment, battery assault, dissuading a witness from reporting a crime and violation of a restraining order. In March 2008, Nate Dogg pleaded guilty to trespassing and battery and was ordered to complete a domestic violence treatment program, probation of three years, and was stripped of gun ownership rights for the next ten years.[17]

In July 2008, Nate Dogg was arrested and charged with two felony criminal threats after allegedly sending threatening emails to his estranged wife,[18] and one count of stalking after allegedly chasing her by car on Interstate 405 in previous month.[19] Hale initially pleaded not guilty to these charges,[19] which were eventually dropped in April 2009, because the alleged victim did not contact prosecutors in the case.[18]

Additionally, Nate Dogg had a conviction of driving under the influence.[19]

On December 19, 2007, Nate Dogg suffered a stroke, according to a coordinator from his recently formed gospel choir, Innate Praise.[20] Reports had circulated that Nate Dogg had been admitted to Pomona Valley Hospital Medical Center in Pomona, California after suffering a heart attack. Erica Beckwith, however, confirmed to MTV News that Nate Dogg was released on December 26 after being treated for a stroke and was admitted to a medical rehabilitation facility to assist him in his recovery. On January 18, 2008, it was officially reported that the stroke had rendered the left side of his body paralyzed. Doctors believed there would be a full recovery, and his voice was not affected. In September 2008, he suffered a second stroke.[21] Nate Dogg died on March 15, 2011 in Long Beach, California at the age of 41. On March 17, his attorney Mark Geragos confirmed that the cause of the death was from complications of multiple strokes.[1]

Nate Dogg's son, Naijiel Hale, is a high school football player who has attracted interest from major college programs for an athletic scholarship.[22][23]

Naijiel will play college football for Chris Petersen at the University of Washington.[24]

During his career, Nate Dogg was nominated for four Grammy Awards.

This article uses material from the article Nate Dogg from the free encyclopedia Wikipedia and it is licensed under the GNU Free Documentation License.

Poison Arrow ABC
Update Required To play the media you will need to either update your browser to a recent version or update your Flash plugin.