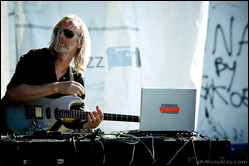 Aarset's debut solo album as a band leader was described by New York Times as "one of the best post-Miles Davis electric jazz albums". As one of the most requested guitarists Aarset has worked with Nils Petter Molvær, Bill Laswell, Jon Hassell, Jan Garbarek, David Sylvian and Marilyn Mazur among many others.[3]

After several releases on the Bugge Wesseltoft label Jazzland, he released the album Dream Logic (2012) on the label ECM, where he collaborated closely with Jan Bang and Erik Honoré on the production and timbral design of melodies, sound sculptures and soundscapes. Aarset is a pioneering guitarist with a great sense of electronics sound and expressiveness, and often the guitar plays a role as manipulable sound source and tool for layer-by-layer routing more than a traditional melody. His style is often associated with that of nu jazz, and his performance, improvising and albums feature, a strong 21'st century electronic influence.[4] He is considered to be one of the unique re-interpretations of what the role and sound of the electric guitarist can be.[1][4][5][6]

Aarset performs regularly at the "Punkt Festival" in Kristiansand, Norway. At the 2013 festival he accompanied Arve Henriksen, Jan Bang, Erik Honoré and Ingar Zach, celebrating the release of two new albums Narrative From The Subtropics by Jan Bang and Places Of Worship by Arve Henriksens, in addition to performing a special "Dream Logic" concert including the lineup Jan Bang, Audun Erlien, Wetle Holte and Erland Dahlen.[3][7]

John Kellman of the All About Jazz magazine recognized Eivind Aarset Dream Logic appearance at The Punkt Festival, Kristiansand, Norway, September 2013, as one of his 25 "Best Live Shows of 2013".[8]

This article uses material from the article Eivind Aarset from the free encyclopedia Wikipedia and it is licensed under the GNU Free Documentation License.

Make Believe Toto
Update Required To play the media you will need to either update your browser to a recent version or update your Flash plugin.