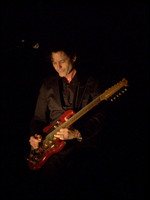 Mark Hart was born on July 2, 1953 and grew up in Fort Scott, Kansas. He has an older brother, Kelly, and an older sister, Millicent. From the age of seven years, Hart received piano lessons and followed by learning guitar some years later. Hart studied classical music at college, and then worked as a full-time session musician with varied artists. In 1982 he formed Combonation which issued its debut eponymous album in 1984 on Warner Bros. Records – it was produced by Ted Templeman (Van Halen).[1] Hart provided vocals, guitar and keyboards - other members were Steve Dudas on guitar, Randy Foote on percussion and backing vocals, Rick Moors on bass guitar and Billy Thomas on drums and backing vocals.[1]

Hart began his association with British rock band Supertramp in 1986, initially as a studio and touring musician. He provided guitar, keyboards, lead and backing vocals for their album, Free as a Bird, which was issued in October 1987.[2]

Hart also shared the same manager as pop-rockers Crowded House, who suggested he fill in for their keyboardist Eddie Rayner with session work for the band after they experienced difficulties working together. In 1991 Hart contributed to Woodface as a session musician, later joining the band as a touring member when Tim Finn left.[3][4] In 1993 Hart was credited as a full member for Together Alone.[3] He stayed with the band after founding drummer Paul Hester left,[3] and is seen along with the group's founders Neil Finn and Nick Seymour in the photographs from the sleeve for Recurring Dream, the 1996 greatest hits album. Hart played with the band during their farewell concert on the steps of the Sydney Opera House in November 1996, known as Farewell to the World.[3][4]

Following the first demise of Crowded House, Hart stated that he thought the band had more in them. He later joined Neil Finn on stage for some of Finn's solo concerts supporting his debut solo album Try Whistling This in 1998. Following this, Hart rejoined Supertramp and produced more works for Tim Finn. In 2002 Hart released his debut solo album Nada Sonata. Hart has scored the motion pictures Life Among the Cannibals (1996) and Mockingbird Don't Sing (2001) both directed by Harry Bromley Davenport.

In January 2007, Neil Finn announced the reformation of Crowded House with Hart, Nick Seymour, and a new drummer, Matt Sherrod (ex-Beck). They released a new album, Time on Earth, and embarked on a year-long world tour. The album was initially intended to be Finn's third solo album, but was converted to a Crowded House album late in the sessions. As a result, Hart contributed on only four songs to the new album. Both he and Sherrod fully contributed to the next album, Intriguer, which was released in June 2010 and both are on the DVD supplements to that album.

This article uses material from the article Mark Hart from the free encyclopedia Wikipedia and it is licensed under the GNU Free Documentation License.

Bigger Man Joy Oladokun & Maren Morris
Update Required To play the media you will need to either update your browser to a recent version or update your Flash plugin.