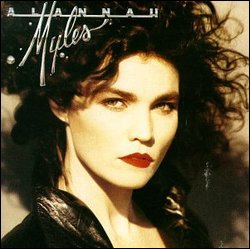 Myles began writing songs around age nine, performing in a songwriting group for the Kiwanis Music Festival in Toronto at age 12. At 18 she began performing solo gigs in southern Ontario, eventually meeting Christopher Ward, a WMG recording artist and songwriter. With Ward's help, she formed her own band and performed cover versions of rock and blues songs, while polishing her own material. By her mid-20s, she and Ward collaborated with David Tyson to produce the eponymously titled debut album, "Alannah Myles." She appeared in a 1984 episode of the television series "The Kids of Degrassi Street," in which she played the role of an aspiring singer and single mother and was featured in several TV and film productions as a guest host and actor prior to becoming a recording artist.[6]

She changed her surname to Myles at age 19 after deciding to pursue a career in entertainment. Appearances in TV commercials paid for music demos which weathered countless rejections from her homeland, Canada, until she recorded masters for three songs; "Who Loves You" and a video demo for "Just One Kiss" directed by photographer Deborah Samuel. With matched financing from her songwriting collaborator, Much Music (City TV) VJ and program director Christopher Ward and FACTOR, she signed her first record contract with Atlantic Records in 1987.

In fall of 1987, Warner Music Canada's director of artists and repertoire (A&R) Bob Roper sent the three-song video package to all of Warner Music Group's U.S. affiliates which garnered a seven-eight year contract from Atlantic Records (WMG) sight unseen by head of A&R Tunc Erim and Atlantic label founder Ahmet Ertegun. Myles left her acting career, co-wrote and recorded the remainder of her first album with Christopher Ward and producer David Tyson. In 1989, Atlantic Records released her self titled debut album and Myles toured internationally for 18 months. Her first album was awarded the Diamond Award for sales of over one million units; she is the only Canadian debut artist to attain that award. Her first album was reported to have sold upwards of 6 million copies internationally and remains a classic-selling album.

In May 1989, Warner Music in Canada released Alannah Myles which produced four Top 40 hits, including "Love Is", "Lover Of Mine", "Still Got This Thing" and her number-one classic rock hit, "Black Velvet". Atlantic Records' 1989 debut album release was ineligible for Grammy nominations until the early 1990 U.S. single release, "Black Velvet" became a number-one hit claiming ASCAP's most played song on radio for 1989 and 1990. By 2000, it had received ASCAP Millionaire Award for over five million radio airplays. "Black Velvet" won Myles the Grammy Award for Best Female Rock Performance in 1991 and three Juno Awards.[7]

In 1992, Myles was nominated for a second Grammy award for Best Female Rock Vocal Performance for the title track "Rockinghorse", the flip side of lead off single, "Song Instead of a Kiss" from her second CD Rockinghorse. "Song Instead Of A Kiss" was a 60-piece orchestrated ballad that reached number one on several radio stations around the globe but was met with little response in America, whose audiences were accustomed to "that slow southern style" of Black Velvet.

The year 1992 brought the follow-up album Rockinghorse, which included the hit singles "Song Instead of a Kiss", written and composed by Myles, Nancy Simmonds, and Canadian poet Robert Priest,[8] "Our World, Our Times", and "Sonny, Say You Will." She received a Grammy nomination for Rockinghorse and several global awards, including a Juno and Much Music's People's Choice Award for "Our World, Our Times".

In 1995, Myles released her final album on Atlantic Records before being released from the label, granting Warner/Atlantic a Best Of CD after only three records. The A-lan-nah album, which contained no Top 40 singles, included two tracks which made it into the Top 100 – "Family Secret" and "Blow Wind, Blow." In 1997, she terminated her eight-record contract with Atlantic Records with the help of her then-manager Miles Copeland III, who immediately signed her to his own Ark 21 Records. On Ark 21, she released A Rival, which contained the Top 40 hit "Bad 4 You", written and recorded by Myles, Desmond Child, and Eric Bazilian at Copeland's Castle Songwriting Retreat at Grand Brassac, France. The "A Rival" album agreement with Miles Copeland III, Ark 21 Records was successfully terminated in 2014 with 100% copyright reversions returned to Alannah Myles by 2015 and re-released on Myles's independently owned label, Fascinate inc.

After the release of "A Rival", Myles released two Best Of compilations, in 1998 and 2001, and both featuring two new songs, and then left Ark 21 Records. She maintained a low profile for almost a decade but gigged around Canada and Europe during this time. In 2001, Myles duetted with Saga frontman Michael Sadler on a cover of Peter Gabriel & Kate Bush's "Don't Give Up", released as a b-side to the Saga single "Money Talks". In 2004, she released a cover of "I Can't Stand The Rain", with Jeff Healey on guitar, for a Tina Turner tribute album What's Love? A Tribute To Tina Turner.

In February 2005, together with the Swedish band Kee Marcello's K2, she participated in the third semi-final of Melodifestivalen, the Swedish national selection for the Eurovision Song Contest. Their selection, "We Got It All," scored very few points and finished seventh out of eight songs, yet it managed to dominate the leading newspaper and media headlines in Sweden.[9]

Myles's first new solo release in a decade was an Elvis Tribute EP, released on iTunes in August 2007, to commemorate the 30th anniversary of Elvis' death. The EP features a re-recording of her signature song "Black Velvet", as well as two new songs. All three of them were later included on her next album.

In April 2008, she released her fifth studio album Black Velvet, which featured a new recording of her song of the same name, in addition to 10 new studio recordings.[10] She discussed the subject of financing and co-producing her own album in May 2008 in an interview with Evan Solomon on CBC News: Sunday Night.[11]

In the spring of 2008, Myles released the CD Black Velvet on Linus Entertainment, which resulted in a staggered release internationally while the indie label merged with Canada's True North Records, followed by a video for the song "Trouble" featuring a jug band performance. "Trouble" was awarded an 'Honourable Mention' as a finalist in the blues category at the 2009 International Songwriting Contest.[12] Myles won the 15th annual USA Songwriting Competition for both Best Rock/Alternative Song as well as grand prize finalist for a selection, written and composed jointly with Nancy Simmonds for her "Black Velvet" CD, titled "Give Me Love."[13]

Her song Black Velvet was one of four selected to be covered on the CBC Television reality television show Cover Me Canada.[14]

This article uses material from the article Alannah Myles from the free encyclopedia Wikipedia and it is licensed under the GNU Free Documentation License.