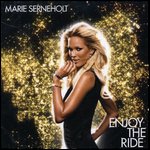 In 1998, Serneholt signed a record deal with Stockholm Records (part of Universal Music Group) along with her then bandmates Sara, Dhani and Amit. Together they performed as the A-Teens. In 1999, they released their first single, a cover of ABBA's Mamma Mia. The single topped the charts in Sweden for 8 consecutive weeks, and the success was similar around the world.

By 2000, the A-Teens' first album, The ABBA Generation had sold 4 million copies, and they became one of the most internationally successful Swedish pop bands.[1]

After 6 years together and more than 5 million albums sold, the A-Teens disbanded following a Greatest Hits album and a final tour in Sweden.

With the A-Teens going their separate ways, it was rumored that Serneholt would be the first to pursue a solo career. This proved to be unfounded when fellow A-Teen Dhani Lennevald released his debut single in September 2004.

Serneholt wanted to live what she could not experience while she was in the band touring around the world, so she chose to live a normal life with her friends and family. While she was living her normal life, she was working as a model on several magazines and fashion shows, as well as a host of several shows in her native Sweden.

In 2005 she was picked as the face of the Maybelline cosmetics line in the Scandinavia. She also gave her voice for the Swedish versions of the movies Robots and Herbie: Fully Loaded. These endeavors allowed Marie to maintain a presence in Swedish media despite the hiatus of her music career.

In 2005, Serneholt was ready to make music again, so she called Jörgen Elofsson, who had previously written for Britney Spears and Céline Dion. Elofsson was busy with other artists at the time, but Serneholt knew he was the right person to produce her album. When she contacted Elofsson again later that year, he had just started collaborating with two relatively young and unknown producers, Richard Brandén and Pär Westerlund.

Elofsson felt that he wanted to work with a Swedish artist that wanted to reach out into the world, an artist he could really believe in and whose career he could be a part of from the start. He created the label Planet Six (a part of SonyBMG), and Marie signed her first record deal as a solo artist.

On February 2006, Serneholt's first single saw the light, "That's The Way My Heart Goes", was premiered on Swedish radio with decent reviews and good response from the public, the single debuted at #2 on the Swedish Charts and reached #1 on the Official Swedish Digital Downloads Chart, ensuring Gold Status on physical sales alone on 19 May 2006.[2]

The album Enjoy the Ride was released on 29 March 2006, debuting at #9 in her home country but dropping off the charts quickly, while the single's success was growing around the world with releases throughout Europe along with the album and with plans to release it in South and North America in 2007.

In May 2006, Serneholt started a promotional tour around Germany coinciding with the German release of her album. She also embarked on a Radio Station's Concert Tour around Sweden and Finland.

In June, Serneholt released her second single, "I Need A House", debuting at #2 on the Swedish Digital Downloads Chart, but failing on the physical sales, reaching a disappointing #40 in Sweden. The single was released in Europe in September 2006.

On 19 August 2006, Serneholt performed at Voice '06 in Kungsträdgården, Stockholm, Sweden.

Serneholt published on her official blog[3] on 22 September that she had finished the video for "Oxygen",[4] stating that it will be released in mid-October and that it was going to be different from any other video she has done.

"Oxygen" was also released as the third single of Marie Serneholt's debut album.

On 3 December 2008, Serneholt was confirmed by SVT as the third of four wildcard artists for Melodifestivalen 2009. On 7 February 2009, during the first semi final heat, she performed her new single, "Disconnect Me". She placed sixth of eight, and did not advance to the finals. "Disconnect Me" (which also serves as the first single from Serneholt's second album) was released on 25 February 2009. As for the album itself, Marie stated that she is hoping for a Fall 2009 release, but the album still had not been released as of February 2011. She worked with Filip Cederholm on the album photoshoots and artwork.

She co-hosted Sveriges Television's broadcast of the National Day of Sweden celebrations in 2009.

In October 2009, it was announced that she would be appearing in a Swedish-language version of the musical Grease, resulting in fans questioning whether or not a follow-up to Enjoy the Ride will ever be released.[5]

Alongside Rickard Olsson, she co-hosted the semi-finals and finals of the Melodifestivalen 2011 contest.

In December 2011, Serneholt released a new single "Himlen I Min Famn", under Warner Music Sweden.[6] She also participated in the first semi-final of Melodifestivalen 2012 which was hold on 4 February 2012 in Vida Arena, Växjö. She sang the song "Salt & Pepper", composed by Lina Eriksson, Mårten Eriksson and Figge Boström. She finished 6th in the first round of voting so she was disqualified from the competition.

Serneholt was announced as one of the judges of the Swedish version of popular talent show The X Factor that premiered on September 9, 2012.

Serneholt is since August 2013 hosting the television lotto show Bingolotto.

This article uses material from the article Marie Serneholt from the free encyclopedia Wikipedia and it is licensed under the GNU Free Documentation License.

Take It Or Leave It Pascal Geiser
Update Required To play the media you will need to either update your browser to a recent version or update your Flash plugin.