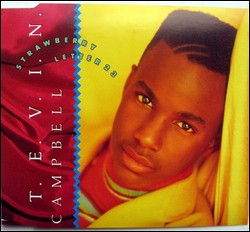 Tevin Jermod Campbell (born November 12, 1976) is an African-American singer, songwriter and actor. Born in Waxahachie, Texas, he displayed a passion for singing at a very early age, performing gospel in his local church. Following an audition for a famous jazz musician in 1988, Campbell was signed to Warner Bros. Records. In 1991, Campbell collaborated with legendary music impresario Quincy Jones and released his platinum-selling debut album, T.E.V.I.N.. The album included his highest-charting single to date, "Tell Me What You Want Me To Do", peaking at #6 on the Billboard Hot 100 chart.

His double-platinum selling second album, I'm Ready, released in 1993, included two of Campbell's most popular songs, "Can We Talk" which peaked at #9 on the Billboard Hot 100, and the album's title track "I'm Ready", which also peaked at #9 on the Billboard Hot 100 chart. In 1996, Campbell released his third album, Back to the World, which was not as commercially or critically successful as his first two releases. His self-titled fourth album, Tevin Campbell, was released in 1999, but, performed poorly on Billboard's album charts.

Apart from music, Campbell commenced an acting career, appearing in Prince's sequel to Purple Rain, Graffiti Bridge. He also made guest appearances on The Fresh Prince of Bel-Air and Moesha television programs, voiced the character named Powerline in Disney's animated A Goofy Movie film and was cast as Seaweed in the Broadway musical Hairspray in 2005.

Born in Waxahachie, Texas, Tevin Campbell had a passion for singing at a young age. He began by singing gospel, first as a choir member, and then as a soloist at Jacob's Chapel in a small town just south of Dallas, Texas.

In 1988, a friend of Campbell's mother arranged for him to audition for jazz flutist Bobbi Humphrey by singing over the phone to her in New York. Humphrey took an interest in Campbell and submitted an audio and videotape to Warner Bros. This led to a meeting with Benny Medina, the Warner's senior vice president and general sales manager of black music.

Campbell was introduced to the R&B world by Quincy Jones in August 1989. Campbell's debut single was "Tomorrow (A Better You, Better Me)" which reached number 1 on the Billboard Hot R&B/Hip Hop Singles chart in June 1990.[1] This was a vocal version of a 1976 instrumental by The Brothers Johnson. It was the lead single from Jones' critically acclaimed ensemble LP Back on the Block which won the Grammy Award for Album of the Year in 1991.[2] After working with Jones and writers and producers including Siedah Garrett,[3] Campbell worked with producers Narada Michael Walden, Al B. Sure, Babyface, and others to record additional music.[4]

Campbell's first solo hit was "Round and Round", which charted at #3 on R&B charts in November 1990[5] and #13 on the Billboard Hot 100 in April 1991 was produced by Prince and was featured in Prince's film Graffiti Bridge.[6] After his appearance in the 1990 film Graffiti Bridge, Campbell made a guest appearance the following year on The Fresh Prince of Bel-Air, playing fictional teen idol, "Little T", a celebrity crush and date of Ashley's in the first season episode, "Just Infatuation". In a later episode, he was referenced when Will threatened to destroy Ashley's Little T posters after she plays with Will's autographed baseball. The song, "Round and Round" earned Campbell a Grammy Award nomination at the 33rd Grammy Awards for Best Male R&B Vocal Performance but lost to Luther Vandross.

Campbell followed the success of his first two singles by releasing his debut album, T.E.V.I.N., in November 1991 which featured the R&B hit singles and Campbell's #1 R&B hit: "Tell Me What You Want Me to Do" followed by "Alone with You", and "Goodbye". T.E.V.I.N. reached #38 on Billboard 200 chart and #5 on the Top R&B/Hip-Hop Albums chart. The album eventually was certified platinum by the RIAA for selling 1 million copies in the United States. T.E.V.I.N. earned Campbell a Grammy Award nomination for Best Male R&B Vocal Performance at the 35th Grammy Awards but lost to Al Jarreau. The album was produced by Jones, Al B. Sure! and  Narada Michael Walden among others.

Between interviews and television appearances following the release of T.E.V.I.N., he contributed to three special projects: Handel's Messiah: A Soulful Celebration, a Grammy Award-winning album produced by Mervyn Warren of Take 6; A Very Special Christmas 2 album, featuring Campbell's rendition of "Oh Holy Night"; and Barcelona Gold, the 1992 Olympics album which includes his hit "One Song".

The singer's second album, the 1993 release of the album I'm Ready, was also produced by Jones and Medina. "I wanted to make a more mature-sounding album to reflect my current state of mind," Campbell explained to J. R. Reynolds in Billboard magazine. "I'm Ready says a lot about who I am as a person because of the things I've been through during the last four years or so. I hope people will see that I'm not the same young kid that I was on my first album." The album was produced by Babyface among others.

I'm Ready released October 1993, yielded the US top ten pop and #1 R&B hit "Can We Talk" in December 1993; "I'm Ready", a US top ten and top five R&B hit;[7] and "Always in My Heart" which charted at the US Hot 100 top twenty and #3 on the R&B chart.[8] He also scored a Top 30 R&B hit with a fourth single, "Don't Say Goodbye Girl". The album was released on October 26, 1993 and went on to reach #18 on the Billboard 200 chart and #3 on the Top R&B/Hip-Hop Albums chart. The album was certified double platinum by the Recording Industry Association of America for selling 2 million copies in the United States. To date I'm Ready is Campbell's biggest selling album and many considered this album to be the high mark of his career despite the fact he was only 16 when he recorded the album. The album was nominated for 3 Grammy Awards: Best Male R&B Vocal Performance for "Can We Talk" at the 36th Grammy Awards, Best Male R&B Vocal Performance for "I'm Ready" and Best R&B Album for I'm Ready both at the 37th Grammy Awards.[7]

In November 1994, Campbell was featured on the soundtrack to the film, A Low Down Dirty Shame singing "Gotta Get Yo' Groove On" produced by Jimmy Jam & Terry Lewis. In September 1994, Campbell also scored an R&B hit with the single "U Will Know" as part of the R&B super-group Black Men United, a group that also included singer Usher. In 1995, Campbell voiced the character Powerline in Disney's animated A Goofy Movie, performing the songs "I 2 I" (also styled as "Eye to Eye") and "Stand Out" for the film's soundtrack.[9] Campbell appeared alongside female recording artist Brandy on the September 28, 1995 episode of NY Undercover called "Digital Underground.Com" singing "The Closer I Get to You".

The year 1996 saw the release of his third album, Back to the World.The album saw production by Sean Combs. The album reached #46 on the Billboard 200 chart and #11 on the Top R&B/Hip-Hop Albums chart. In terms of sales, Back to the World was a disappointment compared to his first two albums T.E.V.I.N. and I'm Ready because it only reached Gold status. The album's first single,"Back To The World", reached #47 on the Billboard 200 chart and #14 on the R&B charts becoming a moderate hit. However, the other two singles didn't even reach the Hot 100, "I Got It Bad" and "Could You Learn To Love" only managed to reach the R&B charts with very low peak positions.

On February 23, 1999, Campbell released his self-titled album, Tevin Campbell, found Campbell venturing into the neo-soul venue. The project was rushed, and as a result charted below the R&B Top 30, with only a single charting, a Top 30 song called "Another Way".[7] The album saw collaborations with Wyclef Jean, Faith Evans, David Foster, and SWV lead singer Coko. In 1999, Campbell made another guest appearance on the hit show Moesha starring Brandy in the episode, "Rite Stuff".

In September 1999, Campbell was arrested after soliciting a lewd act from an undercover policeman during a sting operation in Van Nuys, California. The sting operation was reportedly conducted in an area where there had been numerous complaints from the public about cruising and solicitation. According to police reports, Campbell was also in possession of a small amount of marijuana at the time of his arrest.[10]

During 2000, Campbell stayed out of the public eye. In 2001, Campbell released the compilation album, The Best of Tevin Campbell. Although in 2002, it was reported that he had stopped making music.

Through 2003 to 2004, Campbell had still not made a public appearance and kept a low profile. However in 2005, Campbell made an appearance on Broadway for the musical Hairspray as the character, Seaweed J. Stubbs.[11] Campbell later reprised his role of Seaweed in the Broadway play in the Melbourne and Sydney productions in Australia.[12] He worked with the production up until 2011. During 2006 to 2007, Campbell made little public appearances due to his commitment to Broadway. In May 2008, Campbell released an internet album entitled, 2008, Never Before Heard through Rambo House Media and the album was released to iTunes and Amazon as a means of test marketing some material originally recorded in 2002. After six months of availability, Campbell decided to no longer allow the unpublished material to be downloaded online, and the music can no longer be heard or purchased on these sites.

In early 2009, record producer Narada Michael Walden stated that Campbell was working on a new album with new material to be released in early 2009. However, nothing was ever released. In 2009, Campbell made an appearance at the BET Awards 2009 as he paid tribute to The O'Jays with Trey Songz, Tyrese, and Johnny Gill. In May 2010, Campbell performed on The Mo'Nique Show. He said that many people wanted him to work again on music and is thinking about a comeback. In November 2010, he was featured on the remake of a song by Quincy Jones called "Secret Garden". The remake featured Usher, Robin Thicke, Tyrese Gibson, LL Cool J and Barry White. TV One's show Life After featured Campbell's life and career, as well as updates on his comeback. From 2011 to 2012, Campbell made small appearances here and there. As of 2013, Campbell performed a concert called Tevin Campbell in Cape Town in South Africa as well as traveling to London to perform and was apart of the One Man, One Nation, One Celebration at the FNB Stadium in honor and as tribute to Nelson Mandela. In September 2013, it was announced that Campbell would be returning to the studio with record producer Teddy Riley.

As of February 2014, Campbell is on tour in Australia and has appeared alongside Brian McKnight.

Campbell is a tenor[13] who possesses a four-octave vocal range. His vocal range spanned from E2 to a D#6 in his song "Tell Me What You Want Me to Do".

This article uses material from the article Tevin Campbell from the free encyclopedia Wikipedia and it is licensed under the GNU Free Documentation License.

Carolina's Eyes Joshua Kadison
Update Required To play the media you will need to either update your browser to a recent version or update your Flash plugin.