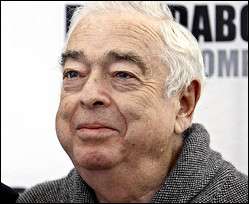 Jerrold Lewis "Jerry" Bock (November 23, 1928 – November 3, 2010) was an American musical theater composer. He received the Tony Award for Best Musical and the Pulitzer Prize for Drama with Sheldon Harnick for their 1959 musical Fiorello! and the Tony Award for Best Composer and Lyricist for the 1964 musical Fiddler on the Roof with Sheldon Harnick.

Born in New Haven, Connecticut and raised in Flushing, Queens, New York, Bock studied the piano as a child. He attended the University of Wisconsin–Madison, where he wrote the musical Big As Life, which toured the state and enjoyed a run in Chicago. After graduation, he spent three summers at the Tamiment Playhouse in the Poconos and wrote for early television revues with lyricist Larry Holofcener.

Bock made his Broadway debut in 1955 when he and Lawrence Holofcener contributed songs to Catch a Star. The following year the duo collaborated on the musical Mr. Wonderful, designed for Sammy Davis, Jr., after which they worked on Ziegfeld Follies of 1956, which closed out-of-town.[1]

Shortly after, Bock met lyricist Sheldon Harnick, with whom he forged a successful partnership. Although their first joint venture, The Body Beautiful, failed to charm the critics, its score caught the attention of director George Abbott and producer Hal Prince. They hired the team to compose a musical biography of former New York City mayor Fiorello La Guardia. Fiorello! (1959) went on to win them both the Tony Award for Best Musical and the Pulitzer Prize for Drama.

Established in 1997, the Jerry Bock Award for Excellence in Musical Theater is an annual grant presented to the composer and lyricist of a project developed in the BMI Lehman Engel Musical Theater Workshop.[2]

Bock spoke at the funeral of 98-year-old Fiddler playwright Joseph Stein just 10 days before his own death, from heart failure at the age of 81, less than three weeks before his 82nd birthday.[3]

This article uses material from the article Jerry Bock from the free encyclopedia Wikipedia and it is licensed under the GNU Free Documentation License.

Land Of Confusion Genesis
Update Required To play the media you will need to either update your browser to a recent version or update your Flash plugin.