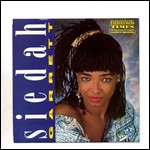 Siedah Garrett (born June 24, 1960) is a British-born American singer and songwriter, who has written songs and performed backing vocals for many recording artists in the music industry, such as Michael Jackson, The Pointer Sisters, Brand New Heavies, Quincy Jones, Tevin Campbell, Donna Summer, Madonna, Jennifer Hudson among others. Garrett has been nominated for two Academy Awards for Best Original Song, and won the Grammy Award for Best Song Written for Visual Media at the 50th Grammy Awards for co-writing "Love You I Do" (performed by Jennifer Hudson) for the 2006 musical film, Dreamgirls.

Garrett was born in Manchester, England and grew up in Stockport until the age of five when her family moved to Los Angeles, California where she grew up. her father was Jamaican and her mother was of Nigerian Descent. She came from a musical background. Her father died in a car crash on Ventura Boulevard in February 2001 and in an interview in mid-2008 she said. I miss him constantly, he was my dad and it was just me and my mom.

Affectionately dubbed "Sid" by Quincy Jones, Siedah Garrett appeared as a contestant on Password Plus in 1980, and performed lead vocals for "One Man Woman" and "The Places You Find Love" in 1989 on Jones' Grammy-Award-winning Back on the Block album. Later, she joined the soul/funk outfit Plush, their self-titled album was issued in 1982 on RCA Records. Her hits include "Don't Look Any Further" with Dennis Edwards (No. 72 pop, No. 2 R&B in 1984); "Do You Want It Right Now?" in 1985 from the Fast Forward soundtrack[1] (No. 3 Hot Dance Music/Club Play and No. 63 R&B), which was covered by Taylor Dayne in 1988 and later covered by Armand Van Helden in 2007 under the title "I Want Your Soul"; "Everchanging Times" from the movie Baby Boom (No. 30 on the Adult Contemporary chart in 1987), and "K.I.S.S.I.N.G." (No. 97 in 1988). The latter song went to No. 1 on the Hot Dance Music/Club Play chart. In the mid 1980s she also toured and recorded with Sérgio Mendes, appearing on three of his albums.

In 1987 Garrett was involved in Michael Jackson's Bad album, singing a duet with Jackson on "I Just Can't Stop Loving You" in several different languages (among which were French and Spanish). She co-wrote the #1 single "Man in the Mirror". In a 2013 interview with Luka Neskovic, Garrett said: "All I wanted to do was give Michael something he would want to say to the world, and I knew it couldn't be another 'Oh baby, I love you' song. It had to be a little bit more than that. It needed to have some substance. He hadn't recorded anything like this to that point. I was just taking the risk that he might not get it, you know. First of all, I need to send it through Quincy because if Quincy didn't like it there is no way that Michael would've ever heard it. It was a huge privilege for me when Quincy decided that the song was good enough to play for Michael."[2]

Garrett and Jackson recorded a Spanish version of "I Just Can't Stop Loving You", titled "Todo Mi Amor Eres Tu" (loosely translated to "All My Love Is You").[3] Also now available is a French version titled "Je Ne Veux Pas La Fin De Nous" which was also recorded during the same recording sessions for the "Bad" album. A gifted musical sight reader with perfect vocal pitch (as most session vocalists are), the initial duet for "I Just Can't Stop Loving You" came as a total surprise to Garrett who simply answered the call expecting to only appear as a background vocalist. She initially felt intimidated with excitement when she entered the recording booth and noticed two music stands with sheet music that had lyric parts labeled "Michael" and "Siedah."

Garrett's association with Jackson enabled her to sing on several Quincy Jones albums of the 1980s and 1990s, co-writing his hit songs "Tomorrow (A Better You, Better Me)", "Back On The Block," and "The Secret Garden (Sweet Seduction Suite)" Garrett also toured with Michael Jackson from 1992 to 1993 on his Dangerous World Tour, singing backing vocals and duetting with him for "I Just Can't Stop Loving You". In the Dangerous album, Garrett also wrote a song "Keep the Faith" with Michael Jackson and Glen Ballard, the co-songwriter of Man in the Mirror. She appears in the concert film "Michael Jackson Live in Bucharest: The Dangerous Tour".

In addition, Garrett's 1988 solo album Kiss Of Life includes "Baby's Got It Bad", a version of Jackson's "Got The Hots" with rewritten lyrics. "Got The Hots" was an unreleased track from the Thriller sessions at the time, but has since been released.

In 1989, she forayed into the acting world, starring in a TV sitcom pilot for NBC called "Wally and the Valentines" opposite William Ragsdale, Audrey Meadows, Tatyana Ali, Tevin Campbell and Cindy Herron.

In 1991, she became host of the show America's Top 10. In 1995 Garrett was also involved with Maysa Leak's (of the group Incognito) solo debut album as co-writer of the track "Sexy" in which she also sang backing vocals.

In 1996 she joined the Brand New Heavies, collaborating on just one album, 1997's Shelter. As part of the band, she co-wrote their top 5 hit "Sometimes" and enjoyed a minor hit with a cover of Carole King's "You've Got A Friend". Garrett left the group in early 1998 to concentrate on her own songwriting. In 1997, she wrote "Be Good or Be Gone" for Edyta Górniak.

Garrett supported Madonna as a backing singer and dancer on The Re-Invention Tour in 2004. Garrett's professional involvement with Madonna goes back some years as she previously supplied backing vocals on some of Madonna's earlier material including True Blue (1986), and Who's That Girl (1987).

In 2006, Garrett contributed her songwriting services to Bill Condon's film adaptation of Dreamgirls, providing lyrics for two of the four new songs added to the score. One of her compositions, the Jennifer Hudson solo "Love You I Do", earned Garrett a nomination for the 2007 Academy Award for Best Original Song. At the 50th Grammy Awards Garrett along with Henry Krieger won the Grammy for Best Song-Motion Picture TV, Visual Media for "Love You I Do".

Garrett co-wrote four songs for the 2011 film Rio, where she is also a featured artist on the soundtrack on the song "Funky Monkey". The song "Real In Rio" (co-written by Garrett, Sergio Mendes, and Carlinhos Brown) was nominated for an Oscar for Best Original Song.

In 2011, she appeared on American Idol singing with contestants Haley Reinhart, and most notably Jacob Lusk, with whom she sang her song "Man in the Mirror". (Air date 04/06/2011)[4]

Garrett's latest single, "Keep On Lovin' You", a tribute to Michael Jackson and an answer to their duet IJCSLY, was made available on iTunes September 11, 2012.

In 2017, she announced that she was diagnosed with multiple sclerosis when performing at the Race To MS event.

This article uses material from the article Siedah Garrett from the free encyclopedia Wikipedia and it is licensed under the GNU Free Documentation License.

Who Can It Be Now? Men At Work
Update Required To play the media you will need to either update your browser to a recent version or update your Flash plugin.