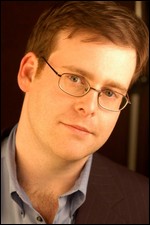 David Ludwig is a descendant of many generations of musicians. His uncle is pianist Peter Serkin, his grandfather was the pianist Rudolf Serkin and his great-grandfather, the violinist Adolf Busch.[2] Ludwig has written music for many musicians and ensembles, including Jonathan Biss, André Watts, Jaime Laredo,[3] eighth blackbird,[4] Jennifer Koh, Network for New Music, the Philadelphia Orchestra and the Minnesota and National Symphonies. Ludwig has held residencies with Meet the Composer, the Isabella Gardner Museum,[5] the MacDowell and Yaddo artist colonies and the Marlboro Music School. He was the composer-in-residence with the Vermont Symphony Orchestra from 2006-2009.[6] His choral work, "The New Colossus," was performed at the 2012 Presidential Inauguration of Barack Obama.[7] He is currently on the composition faculty at the Curtis Institute of Music, the Artistic Director of the Curtis 20/21 Contemporary Music Ensemble, and the Dean of Artistic Programs.[8]

Ludwig attended Oberlin Conservatory for his undergraduate degree where he was a student of Richard Hoffmann and received his M.M. from The Manhattan School of Music. He completed additional post-graduate work at The Curtis Institute with Richard Danielpour, Jennifer Higdon and Ned Rorem, and at the Juilliard School with John Corigliano. He received his PhD from the University of Pennsylvania where he was the George Crumb Fellow.[9]

This article uses material from the article David Ludwig (composer) from the free encyclopedia Wikipedia and it is licensed under the GNU Free Documentation License.

How Do You Do! Roxette
Update Required To play the media you will need to either update your browser to a recent version or update your Flash plugin.