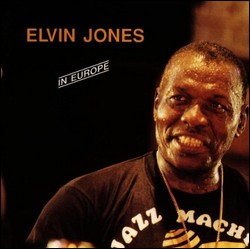 Elvin Ray Jones (September 9, 1927 – May 18, 2004) was an American jazz drummer of the post-bop era.[1] He showed an interest in drums at a young age, watching the circus bands march by his family's home in Pontiac, Michigan. He served in the United States Army from 1946 to 1949 and subsequently played in a Detroit house band led by Billy Mitchell. He moved to New York City in 1955 and worked as a sideman for Charles Mingus, Teddy Charles, Bud Powell and Miles Davis.[1]

From 1960 to 1966 he was a member of the John Coltrane quartet (along with Jimmy Garrison on bass and McCoy Tyner on piano), a celebrated recording phase, appearing on such albums as A Love Supreme. Following his work with Coltrane, Jones led several small groups, some under the name The Elvin Jones Jazz Machine. His brothers Hank Jones and Thad Jones were also jazz musicians with whom he recorded.[1] He was inducted into the Modern Drummer Hall of Fame in 1995.[2]

Elvin Jones was born in Pontiac, Michigan to parents Henry and Olivia Jones, who had moved to Michigan from Vicksburg, Mississippi. His brothers, Hank Jones and Thad Jones, both became important jazz musicians. By age two, he said he knew he held a fascination for drums. He would watch the circus marching band parades go by his home as a boy, particularly fascinated by the drummers.

Following his early passion, Elvin joined his high school's black marching band, where he developed his foundation in rudiments. Jones began service in the United States Army in 1946. He was discharged in 1949. With his mustering-out pay and an additional $35 (US$360 in 2017 dollars[3]) borrowed from his sister when he got back, Jones was able to buy his first drumset.[4]

Jones began his professional career in 1949 with a short-lived gig in Detroit's Grand River Street club. Eventually he went on to play with artists such as Miles Davis and Wardell Gray. In 1955, after a failed audition for the Benny Goodman band, he found work in New York City, joining Charles Mingus's band, and releasing a record called '"Blue Moods" on Debut records.

In 1960, he joined the classic John Coltrane Quartet, which also included bassist Jimmy Garrison and pianist McCoy Tyner. Jones and Coltrane often played extended duet passages. This band is widely considered to have redefined "swing" (the rhythmic feel of jazz) in much the same way that Louis Armstrong, Charlie Parker, and others did during earlier stages of jazz's development. He stayed with Coltrane until 1966. By that time, Jones was not entirely comfortable with Coltrane's new direction and his polyrhythmic style clashed with the "multidirectional" approach of the group's second drummer, Rashied Ali.

Jones remained active after leaving the Coltrane group, and led several bands in the late sixties and seventies that are considered highly influential groups.

Notable among them was a trio formed with saxophonist and multi-instrumentalist Joe Farrell and (ex-Coltrane) bassist Jimmy Garrison, with whom he recorded the Blue Note album Puttin' It Together. Jones recorded extensively for Blue Note under his own name in the late sixties and early seventies, with groups that featured prominent as well as up and coming greats.

The two-volume Live at the Lighthouse showcases a 21- and 26-year-old Steve Grossman and Dave Liebman, respectively. Jones played on many significant albums of the modal jazz era, such as The Real McCoy with McCoy Tyner and saxophonist Wayne Shorter's Speak No Evil.

Jones' sense of timing, polyrhythms, dynamics, timbre, and legato phrasing brought the drumset to the foreground. Jones was touted by Life Magazine as "the world's greatest rhythmic drummer", and his free-flowing style was a major influence on many leading drummers, including Christian Vander, Mitch Mitchell (whom Jimi Hendrix called "my Elvin Jones"), Ginger Baker and Janet Weiss.

He appeared as the villain Job Cain in the 1971 musical Western film Zachariah,[5] in which he performed a drum solo after winning a saloon gunfight.[5]

In 1999, Jones worked with Our Lady Peace on their album Happiness...Is Not a Fish That You Can Catch. He was featured playing drums on the song "Stealing Babies", which was also featured on their 2009 compilation album The Very Best of Our Lady Peace.

Jones performed and recorded with his own group, the Elvin Jones Jazz Machine, whose line up changed through the years. Sonny Fortune and Ravi Coltrane, John Coltrane's son, both played saxophone with the Jazz Machine in the early 1990s, appearing together with Jones on In Europe on Enja Records in 1991. Jones, who taught regularly, often took part in clinics, played in schools, and gave free concerts in prisons. His lessons emphasized music history as well as drumming technique.

In 2001, Jones was awarded an Honorary Doctorate of Music from Berklee College of Music.[6]

Elvin Jones died of heart failure in Englewood, New Jersey on May 18, 2004.[7] He was survived by his first wife Shirley and his second, albeit common-law, wife Keiko (Elvin married Keiko before divorcing Shirley, meaning that legally he and Keiko were not married), in addition to his son Elvin Nathan Jones of California and daughter Rose-Marie Rosie Jones of Sweden.

This article uses material from the article Elvin Jones from the free encyclopedia Wikipedia and it is licensed under the GNU Free Documentation License.

Unforgivable Sinner Lene Marlin
Update Required To play the media you will need to either update your browser to a recent version or update your Flash plugin.