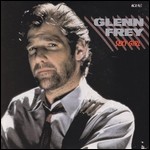 Glenn Lewis Frey (/fraɪ/; November 6, 1948 – January 18, 2016) was an American singer, songwriter and actor, best known as a founding member of the rock band Eagles. Frey was the lead singer and frontman for the Eagles, roles he came to share with fellow member Don Henley, with whom he wrote most of the Eagles' material. Frey played guitar and keyboards as well as singing lead vocals on songs such as "Take It Easy", "Peaceful Easy Feeling", "Tequila Sunrise", "Already Gone", "James Dean", "Lyin' Eyes", "New Kid in Town", and "Heartache Tonight".

After the breakup of the Eagles in 1980, Frey embarked on a successful solo career. He released his debut album, No Fun Aloud, in 1982 and went on to record Top 40 hits "The One You Love", "Smuggler's Blues", "Sexy Girl", "The Heat Is On", "You Belong to the City", "True Love", "Soul Searchin'" and "Livin' Right". As a member of the Eagles, Frey won six Grammy Awards, and five American Music Awards. The Eagles were inducted into the Rock and Roll Hall of Fame in 1998, the first year they were nominated. Consolidating his solo recordings and those with the Eagles, Frey had 24 Top 40 singles on the Billboard Hot 100.

Frey was born in Detroit, Michigan.[1] Growing up in Royal Oak, Michigan, he studied piano at age five, later switched to guitar, and became part of the mid-1960s Detroit rock scene.[2] One of his earliest bands was called the Subterraneans, named after Jack Kerouac's novel,[3] and included fellow Dondero High School classmates Doug Edwards (later replaced by Lenny Mintz) on drums, Doug Gunsch and Bill Barnes on guitar and Jeff Hodge on bass.

Immediately after graduating from Dondero in 1966, he was invited to join The Four of Us, a local band led by Gary Burrows who had seen him performing with the Subterraneans.[3][4] Frey also attended Oakland Community College while in the band, and he learned to sing harmonies performing with The Four of Us.[4] In 1967, He formed the Mushrooms with Gary Burrows' brother Jeff, Bill Barnes, Doug Gunch, and Larry Mintz. That year Frey also met Bob Seger, who helped Frey get a management and recording contract with a label formed by Seger's management team, Hideout Records.[5] Seger also wrote and produced the band's first single, "Such a Lovely Child",[6][7] and the band made television appearances to promote it. Frey had intended to join Seger's group but his mother blocked that course of action for smoking cannabis with Seger.[4] In the later part of 1967, Frey also pulled together another band called Heavy Metal Kids with Jeff Burrows (piano), Jeff Alborell (bass), Paul Kelcourse (lead guitar) and Lance Dickerson (drums).[3]

In 1968, at age 19, Frey played the acoustic guitar and performed background vocals on Seger's single, "Ramblin' Gamblin' Man".[8] Frey has said that Seger strongly encouraged and influenced him to focus on writing original songs.[9] They remained good friends and occasional songwriting partners in later years, and Frey would also sing on Seger's songs such as "Fire Lake" and "Against the Wind".[3][4]

In Detroit, Frey also met and dated Joan Sliwin of the local female group The Mama Cats, which became Honey Ltd. after the group moved to California in 1968.[4] Frey went to Los Angeles hoping to reconnect with his girlfriend, and he was introduced to J. D. Souther by her sister, Alexandra Sliwin, who was with Souther at the time.[10] Frey returned to Detroit after three weeks, but then went back again to Los Angeles to form a duo with Souther called Longbranch Pennywhistle.[11] They were signed to Amos Records and released a self-titled album in 1969, which contains songs he wrote such as "Run, Boy, Run" and "Rebecca", and "Bring Back Funky Women" he co-wrote with Souther.[12] Frey also met Jackson Browne during this period. The three musicians lived in the same apartment building for a short time, and Frey later said that he learned a lot about songwriting from hearing Browne work on songs in the apartment below.[13]

Tenure with the Eagles

Frey met drummer Don Henley in 1970. They were signed to the same label, Amos Records, at that time and both spent time at the Troubadour. When Linda Ronstadt needed a backup band for an upcoming tour, her manager John Boylan hired Frey because he needed someone who could play rhythm guitar and sing. Don Henley was approached by Frey to join Ronstadt.[14] Randy Meisner and Bernie Leadon were also hired, although as the backing band personnel changed through the tour, the four had only played once together at a gig at Disneyland.[15][16] Frey and Henley decided to form a band together while on the tour, and they were joined by Meisner on bass and Leadon on guitar, banjo, steel guitar, mandolin and dobro, forming the Eagles, with Frey playing guitar and keyboards and Henley playing drums. The band went on to become one of the world's best-selling groups of all time.[17] Frey wrote or co-wrote (often with Henley) many of the group's songs, and sang the lead vocals on a number of Eagles hits including "Take It Easy", "Peaceful Easy Feeling", "Already Gone", "Tequila Sunrise", "Lyin' Eyes", "New Kid in Town", "Heartache Tonight" and "How Long".

The Eagles broke up around 1980 and reunited in 1994, when they released a new album titled Hell Freezes Over. The album had live tracks and four new songs. The Hell Freezes Over Tour followed. In 2012 on The Tavis Smiley Show, Frey told Smiley, "When the Eagles broke up, people used to ask me and Don, 'When are the Eagles getting back together?' We used to answer, 'When Hell freezes over.' We thought it was a pretty good joke. People have the misconception that we were fighting a lot. It is not true. We had a lot of fun. We had a lot more fun than I think people realize." At their first live concert of 1994, Frey told the crowd, "For the record, we never broke up. We just took a 14-year vacation."[18]

In May 2012, Frey was awarded an honorary Doctorate of Music from Berklee College of Music along with Henley, Joe Walsh and Timothy B. Schmit.[20]

In 2013, the two-part documentary History of the Eagles, directed by Alison Ellwood and co-produced by Academy Award winner Alex Gibney, was aired on Showtime. The documentary won an Emmy Award in 2013 for Outstanding Sound Mixing For Nonfiction Programming. An accompanying two-year History of the Eagles world tour ended on July 29, 2015 at Bossier City, Louisiana, a concert which would be Frey's final public appearance with the band.

After the Eagles disbanded, Frey achieved solo success in the 1980s, especially with two No. 2 hits. In 1984, he recorded in collaboration with Harold Faltermeyer the worldwide hit, "The Heat Is On", the main theme from the Eddie Murphy action comedy film Beverly Hills Cop; then, Frey performed "You Belong to the City" (from the television series Miami Vice, the soundtrack of which stayed on top of the U.S. album charts for 11 weeks in 1985). His other contribution to the soundtrack, "Smuggler's Blues", hit No. 12 on the Billboard Hot 100. During his solo career, Frey had 12 charting songs in the U.S. Top 100. Eleven of those were written with Jack Tempchin who also wrote "Peaceful Easy Feeling".[21]

Frey was the first choice to record "Shakedown", the theme for the film Beverly Hills Cop II. Frey did not like the lyrics and then came down with laryngitis, so the song was given to Bob Seger. After the song went to number one, Frey called to congratulate Seger, saying "At least we kept the money in Michigan!"[22]

Frey also contributed the song "Flip City" to the Ghostbusters II soundtrack, and "Part of Me, Part of You" to the soundtrack for Thelma & Louise. In 2005, he appeared on B.B. King & Friends: 80 on the track "Drivin' Wheel".[23]

In the late 1990s, Frey founded a record company, Mission Records, with attorney Peter Lopez.[24] Frey never released any of his own work on the label and the company has since disbanded.

As a television actor, Frey guest starred on Miami Vice in the first-season episode "Smuggler's Blues", inspired by his hit song of the same name, and had a starring role in the "Dead Dog Arc" of Wiseguy.[25] He was also the star of South of Sunset, which was canceled after one episode. In the late 1990s, he guest-starred on Nash Bridges as a policeman whose teenage daughter had run amok and gone on a crime spree with her sociopathic boyfriend. In 2002, he appeared on HBO's Arliss, playing a political candidate who double-crosses Arliss and must pay a high price for it.

Frey's first foray into film was his starring role in Let's Get Harry, a 1986 film about a group of plumbers who travel to Colombia to rescue a friend from a drug lord. Frey's next film appearance was a smaller role in Cameron Crowe's third film, Jerry Maguire (1996). Frey played the frugal general manager of the Arizona Cardinals football team who, in the film's climax, finally agrees to pay Cuba Gooding Jr.'s character, wide receiver Rod Tidwell, a large professional contract.[26]

Frey was married twice. From 1983 to 1988, he was married to artist Janie Beggs. He married dancer and choreographer Cindy Millican in 1990. They had three children: a daughter Taylor, and two sons Deacon and Otis, and remained together until his death.[27][28]

Since approximately 2000, Frey suffered from rheumatoid arthritis, which affected various joints of his body.[29] The medication that he was prescribed to control the disease eventually led to colitis and pneumonia,[29] and in November 2015, the Eagles announced that they were postponing their appearance at the Kennedy Center Honors as Frey required surgery for intestinal problems and a lengthy recovery period.[30] Following surgery, he was placed in a medically-induced coma at Columbia University Medical Center.[31] Frey died there on January 18, 2016 age 67 from complications of rheumatoid arthritis, acute ulcerative colitis, and pneumonia, while recovering from gastrointestinal tract surgery.[2][32][33][34] Medications for rheumatoid arthritis or ulcerative colitis can compromise the immune system’s ability to fight off pneumonia.[35]

Frey was publicly mourned by his friends, fellow musicians and bandmates[36] including Don Henley,[37] Randy Meisner,[38] J. D. Souther,[39] Jack Tempchin,[40] Irving Azoff,[41] Linda Ronstadt,[42] Don Felder,[43] and Bob Seger.[44] At the 58th Annual Grammy Awards, the remaining members of the Eagles and Jackson Browne performed "Take It Easy" in his honor.[45] A life-sized statue of Frey was unveiled at the Standin' on the Corner Park in Winslow, Arizona, on September 24, 2016, to honor his songwriting contributions to "Take It Easy", made famous by the Eagles as their first single in 1972.[46]

Takamine Guitars manufactures a Glenn Frey signature acoustic-electric guitar, the EF360GF. It is designed to replicate the Takamine Frey used for his live and studio applications.[63] In the 1970s, Frey used Martin acoustic guitars in both six- and 12-string versions.

This article uses material from the article Glenn Frey from the free encyclopedia Wikipedia and it is licensed under the GNU Free Documentation License.

Carnival Natalie Merchant
Update Required To play the media you will need to either update your browser to a recent version or update your Flash plugin.