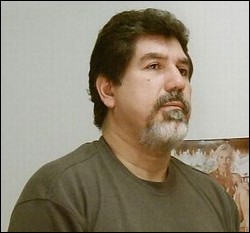 Stephen Bray (born December 23, 1956 in Detroit, Michigan) is an American songwriter, drummer, and record producer. He is best known for his collaboration with Madonna. Bray owns and operates Saturn Sound recording studios and the Soultone Records record label. He is married to movie producer Stephanie Allain, who produced Hustle & Flow and Black Snake Moan.

Bray began studying music through private instruction in Detroit, and continued his education at Berklee College of Music in Boston.

Bray met Madonna during her pre-stardom when she attended the University of Michigan in Ann Arbor for dance. He moved to New York after receiving a call from Madonna years later, who at that time, was a member of the band The Breakfast Club in New York City. Madonna wanted to form a new band and invited Bray to play the drums. Together they formed the band Emmy and the Emmys.

Madonna obtained her recording contract with Gotham Management, with Camille Barbone. The music she was producing with them was more rock oriented and Madonna had her eyes set on dance music. She and Stephen Bray continued working on a parallel project, more club oriented. After being signed to Sire Records, Madonna continued collaborating with Bray.

Together, they have written and produced some of the biggest hit songs of the 1980s, including several of Madonna's biggest hits. The songs Bray and Madonna composed often followed a distinctive structure, many of which repeats the song's second verse and bridge before fading out with the chorus. Their partnership appears to have concluded with their work on Madonna's Like a Prayer album.

Bray still holds the master recordings to many unreleased Madonna songs, including those on the album Pre-Madonna (which 1800Harmony released in 1997 without Madonna's authorization).

Following Madonna's rise to stardom, Bray rejoined The Breakfast Club, and the quartet signed first with ZE Records and later with MCA. The band's eponymous first album was released in early 1987, preceded by the Top 10 hit "Right on Track". Bray co-wrote most of the albums' songs with bandmate Dan Gilroy and Bray produced several songs. The band's second album was not released and The Breakfast Club broke up shortly afterward.

Bray made his Broadway debut in 2005 as composer and lyricist for the Broadway version of the Alice Walker book, The Color Purple.[1] He was nominated for a Tony Award for his work on the show.[1][2]

This article uses material from the article Stephen Bray from the free encyclopedia Wikipedia and it is licensed under the GNU Free Documentation License.

Big Yellow Taxi Amy Grant
Update Required To play the media you will need to either update your browser to a recent version or update your Flash plugin.