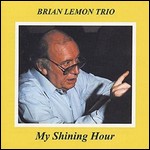 Lemon was born in Nottingham, UK. He moved to London in the mid-1950s to join Freddy Randall's group.[2] After that he worked with a variety of groups including those of George Chisholm and Kenny Baker. Over the years, he also worked with Benny Goodman, Charlie Watts, Scott Hamilton, Buddy Tate, Milt Jackson, Ben Webster and Digby Fairweather. He also had his own octet which played songs by Billy Strayhorn.

Lemon recorded a sequence of 27 CDs for the Zephyr label over 10 years from 1994, though not always as leader. Zephyr was set up by the retired businessman John Bune, and was initially established with the sole intention of documenting Lemon's work.[3] Lemon retired from music around 2005 after the development of severe osteoarthritis in his hands.[1][3]

This article uses material from the article Brian Lemon from the free encyclopedia Wikipedia and it is licensed under the GNU Free Documentation License.

Love Shines Fleetwood Mac
Update Required To play the media you will need to either update your browser to a recent version or update your Flash plugin.