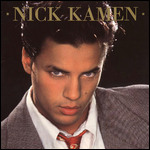 Kamen attended St Marks RC Comprehensive School in Harlow along with his brother Chester. Kamen was first brought to the public's attention in 1984 when Ray Petri featured him on the front cover of The Face.[2] The cover showed him wearing a ski-hat, lipstick, orange roll-neck sweater and aviator sunglasses.

He is most remembered, in the UK, for his 1985 performance in Levi's "Launderette" television commercial,[3] where he strips down to stone-wash his blue jeans in a 1950s style public laundromat while he waits clad only in his boxer shorts, which was one of a series of Bartle Bogle Hegarty advertisements that dramatically increased the popularity of Levi 501s. The commercial, directed by Roger Lyons, was selected for, and came fourth in, The 100 Greatest TV Ads in 2000.[4]

His first single was the 1986 UK number five hit "Each Time You Break My Heart" from his eponymous début album.[5] Written and produced by Madonna and Stephen Bray, it also cracked both the US dance chart (remix by Shep Pettibone) and the Top 50 in Canada. Madonna also sang the backing vocals. Her original demo remains one of many unreleased Madonna songs. Kamen also had a No. 16 follow-up in the UK with the second single, "Loving You Is Sweeter Than Ever" (a cover of the Four Tops' 1966 hit), although his later singles were less-commercially successful in the UK[5] but more so in the rest of Europe, particularly Italy, France, Germany and Spain.

Kamen's second album Us (1988) was produced by Patrick Leonard. Madonna again made an appearance as a backing vocalist on the song "Tell Me", this time without contributing to the songwriting or production. In 1989 Kamen performed the song "Turn It Up" on the soundtrack to Walt Disney's film, Honey, I Shrunk the Kids. 1990 saw the release of one of his biggest hits. The single "I Promised Myself", from the album Move Until We Fly, reached Number 1 in eight European countries and was the fourth most played record in Europe in 1990. The song was later covered by Dead or Alive (1999), A-Teens (2004), Basshunter (2009) and most recently German punk rockers Maggers United (2013).

In 1992, Nick Kamen released his last album to date, entitled Whatever, Whenever.

This article uses material from the article Nick Kamen from the free encyclopedia Wikipedia and it is licensed under the GNU Free Documentation License.

Train Station Mellowtone
Update Required To play the media you will need to either update your browser to a recent version or update your Flash plugin.