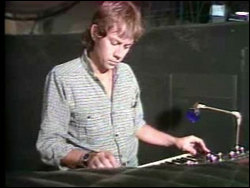 Peter John Wood (9 April 1950 1993)[1] was an English musician, a Keyboardist born in Middlesex, England. In his early years he lived with his parents in Hythe Field Avenue, Egham, Surrey. He was a member of Quiver, latterly "Sutherland Brothers & Quiver", and Natural Gas, before he began to work closely with Al Stewart, Roger Waters, as well as Cyndi Lauper, Jonathan Kelly, Tommy Shaw and Bob Dylan.

Wood is the co-writer of the 1976 Al Stewart single "Year of the Cat".

Wood died in December 1993 at the age of 43. There have been conflicting reports on the cause of his death, ranging from suicide to slipping on his kitchen floor and cracking his head open.[4]

This article uses material from the article Peter Wood (musician) from the free encyclopedia Wikipedia and it is licensed under the GNU Free Documentation License.

Hold On Santana
Update Required To play the media you will need to either update your browser to a recent version or update your Flash plugin.