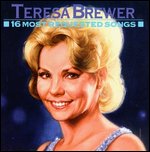 Teresa Brewer (May 7, 1931 October 17, 2007) was an American pop singer whose style incorporated elements of country, jazz, R&B, musicals and novelty songs. She was one of the most prolific and popular female singers of the 1950s, recording nearly 600 songs.

Theresa Veronica Breuer was born in Toledo, Ohio, the first of five children[1] born to her father, an inspector of glass for the Libbey Owens Company (now Pilkington Glass), and her mother, a housewife. When she was two years old, her mother entered her in an audition for a radio program, "Uncle August's Kiddie Show" on Toledo's WSPD. She performed for cookies and cupcakes donated by the sponsor. Although she never took singing lessons, she took tap dancing lessons. From age five to twelve, she sang and danced on the "Major Bowes Amateur Hour," then a popular touring radio show. Her aunt Mary traveled with Theresa until Theresa's 1949 marriage to William Monahan. Brewer was devoted to her aunt, who lived with Brewer until the aunt's death in 1993.

At the age of 12, Brewer returned to Toledo and ceased touring in order to have a normal school life. She continued to perform on local radio. In January 1948, the 16-year-old won a local competition, and (with three other winners) was sent to New York to appear on a talent show called "Stairway to the Stars", featuring Eddie Dowling. It was at about that time that she changed the spelling of her name from Theresa Breuer to Teresa Brewer. She won a number of talent shows and played night clubs in New York (including the Latin Quarter).

Teresa married William "Bill" Monahan in 1949, and they had four daughters, Kathleen, Susan, Megan and Michelle.[2][3] They eventually separated, and the marriage was dissolved in 1972, shortly before she married Bob Thiele.

An agent, Richie Lisella, heard her sing and took her career in hand, and soon she was signed to a contract with London Records. In 1949 she recorded a record called "Copenhagen" with the Dixieland All-Stars. The B side was the song "Music! Music! Music!". Unexpectedly, it was not the A side but the B side which took off, selling over a million copies and becoming Teresa's signature song. Another novelty song, "Choo'n Gum", hit the top 20 in 1950, followed by "Molasses, Molasses". Although she preferred to sing ballads, her only recorded ballad to make the charts was "Longing for You" in 1951.

In 1951 Brewer switched labels, going to Coral Records. Since she never learned to read music, she had demos sent to her to learn the melodies of the songs she would record. Despite her lack of formal training, she had a number of hits for Coral. One recording, "Gonna Get Along Without You Now" (1952) was better known in a 1956 version by Patience and Prudence and was also a hit in 1964 for Skeeter Davis as well as Tracey Dey. In 1952, she also recorded "You'll Never Get Away" in a duet with Don Cornell, followed in 1953 by her best selling hit, "Till I Waltz Again with You".

In the mid-1950s she did a number of covers of rhythm and blues songs like "Pledging My Love" and "Tweedle Dee". She covered some country songs like "Jilted", "I Gotta Go Get My Baby", and "Let Me Go, Lover!." In 1956 she co-wrote "I Love Mickey", about New York Yankees center fielder Mickey Mantle, who appeared on the record with Brewer. It was also reported that the two had developed a mutual attraction. Another 1956 hit was Brewer's syncopated rendition of "Mutual Admiration Society". In 1957 she recorded more covers: of country song "Teardrops in My Heart" and R&B songs "You Send Me"[4] and "Empty Arms". In 1960, she had another hit with a cover of the standard "Have You Ever Been Lonely?". Her final charted recording was "Milord" in 1961, an English language version of a song by Édith Piaf.

In 1962 she switched labels again, to Philips Records, where she recorded many singles and albums over a five-year period, including Gold Country in 1966. In addition to having her record new and contemporary material, Philips put Brewer in the studio to re-record her earlier material with new arrangements, instrumentation and recording equipment: the resulting album (PHM 200-062) was issued as Teresa Brewer's Greatest Hits. After leaving Philips, Brewer made a few recordings for other companies, but with no more big chart hits. In the 1970s she released a few albums on Flying Dutchman Records owned by her second husband, jazz producer Bob Thiele. In 1975 she released an album Unliberated Woman produced by Elvis Presley's producer Felton Jarvis. One of the tracks is "For the Heart" written by Dennis Linde.

She appeared in the 1953 musical Those Redheads From Seattle - she was a natural redhead herself. She appeared on television as a guest star on The Muppet Show[5] and Sha Na Na in 1977.

Brewer re-emerged as a jazz vocalist on Thiele's Amsterdam label in the 1980s and 1990s recording a number of albums including tribute albums to Bessie Smith, Louis Armstrong, Fats Waller and Irving Berlin. She also recorded with such jazz greats as Count Basie, Duke Ellington, Dizzy Gillespie, Earl Hines and Bobby Hackett.

Her record-producer husband died in 1996, and Brewer never recorded after that.[7] All together, she had recorded nearly 600 song titles. For her contribution to the recording industry, Teresa Brewer has a star on the Hollywood Walk of Fame at 1708 Vine Street. In 2007, she was inducted into the Hit Parade Hall of Fame.

This article uses material from the article Teresa Brewer from the free encyclopedia Wikipedia and it is licensed under the GNU Free Documentation License.

Dreams Fleetwood Mac
Update Required To play the media you will need to either update your browser to a recent version or update your Flash plugin.